There are bound to be several viewers out there who would consider ‘Aadya Rathri’ as undamaging, passable entertainment, which indeed it is. But it has nothing new or fresh to bring to the genre, and seriously suffers from the limitations of its imagination. 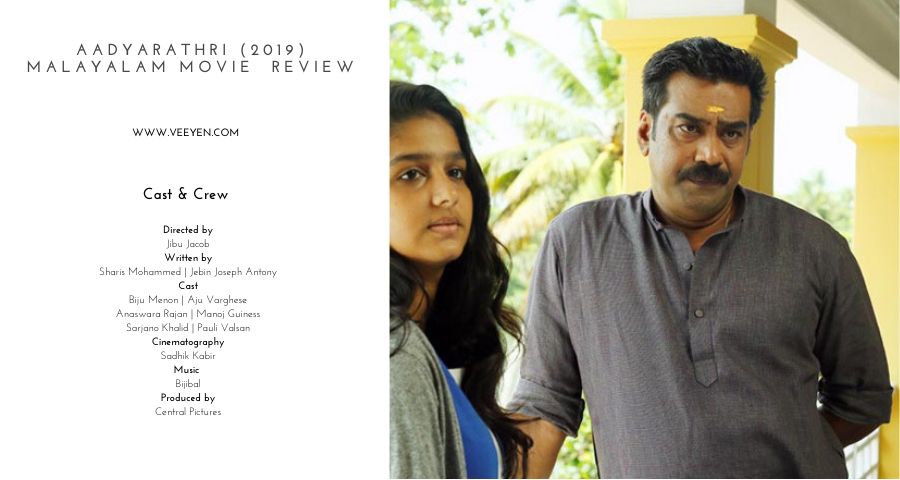 There is a benchmark that Jibu Joseph’s much appreciated debut film ‘Vellimoonga’ has set, and while it remains unfair that every successive film that the film maker comes up with, will invariably end up being compared to his first film, this is precisely what holds true, in the case of his latest film ‘Aadya Rathri’ as well.

Biju Menon plays Manoharan in the film, a man who had lost his father all on a sudden when his sibling elopes with her lover on the eve of her marriage. This event transforms Manoharan into a man who vehemently opposes romance of all sorts and who personally seeks out the best of arranged matrimonial alliances for the young men and women of his village.

As is characteristic of the director’s former films, this one too gets off to a flying start. The scene soon shifts from Mullakkara to Bangalore, where Aswathy (Anaswara Rajan), whom  Manoharan considers as his own daughter, is busy pursuing her graduation. Little does Manoharan realize that the pretty girl whom he hopes to get married to the village nob Kunjumon (Aju Varghese) is in love with her college mate Sathya (Sarjano Khalid).

What follows is an hour of gibberish that makes no sense whatsoever and in the course of a song that appears, Manoharan and his close aide Kunjatta (Manoj Guinness) run along the streets of Bangalore with some Kannada goons in hot pursuit. They soon land back in Kerala with Aswathy, who agrees to pretend a willingness to marry Kunjumon, if Manoharan would support her decision to wed Sathya. 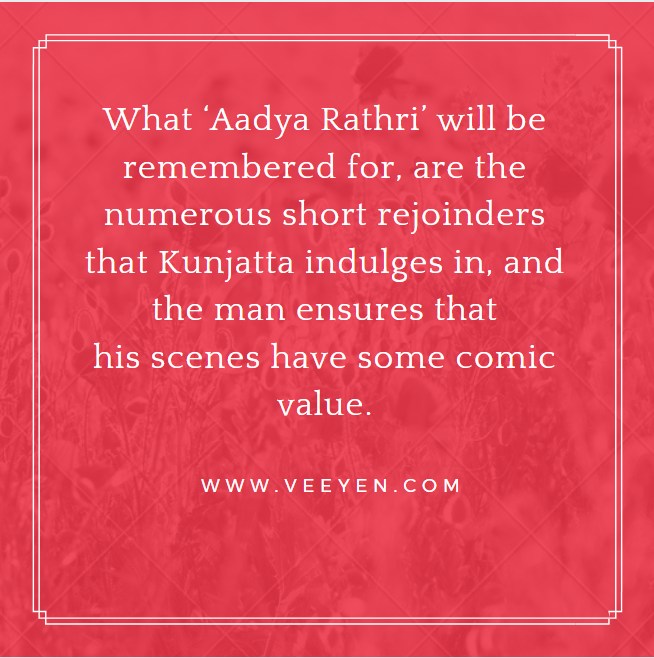 What ‘Aadya Rathri’ will be remembered for, are the numerous short rejoinders that Kunjatta indulges in, and the man ensures that his scenes have some comic value. The rest of it all spreads around and flows over like a hastily buttered piece of toast, with the butter running out on and over all sides. But this is also comedy without a real soul, and when it goes back to the premise that it needs to focus on, its hollowness comes straight through.

Which is why we cannot escape the feeling that this Jibu Jacob film scores low when it comes to the theme that it dwells on, or the execution. It also stretches the limits of make-believe a bit too much, even making Sathya arrive at Mullakara and taking up a job as a tutor at a local tuition centre where he teaches English literature and makes his girl students gush and blush in admiration. 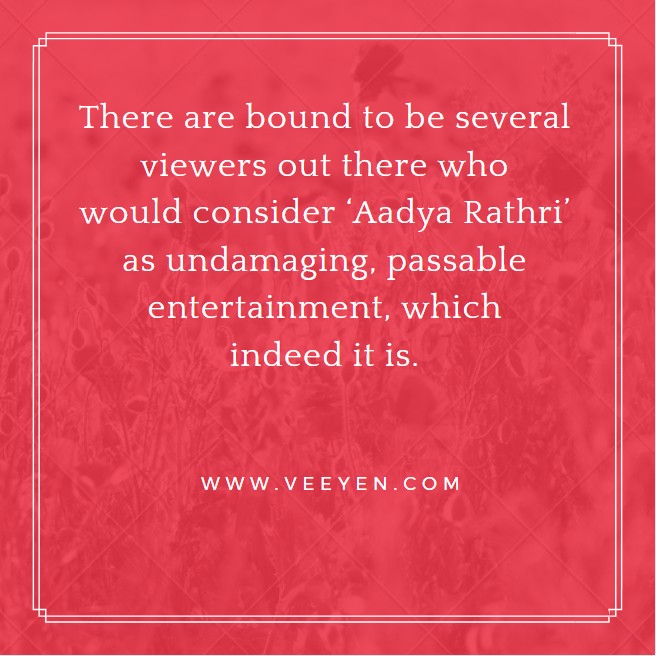 While Biju Menon does a very decent job of playing Manoharan and his energy level never falters, Manoj Guinness and Aju Varghese turn out to be the scene stealers in ‘Aadya Rathri’. There is also a terrible miscast in the film, and Anaswara Rajan appears too young in a role that certainly demanded an actor who is much older. There are capably supportive performances from actors as Vijayaraghavan, Sreelekshmi, Sarjano and Pauli Valsan. Sadhik Kabeer’s cinematography is competent, while Bijibal comes up with an extremely hummable musical score.

There are bound to be several viewers out there who would consider ‘Aadya Rathri’ as undamaging, passable entertainment, which indeed it is. But it has nothing new or fresh to bring to the genre, and seriously suffers from the limitations of its imagination.