This is a collective that offers three films in the increasing order of effectiveness, starting off with quite passable stuff at one end and ending with an engaging component at the other. As such, it does not spin off much in an interesting fresh direction, and for the most part makes do with some disposable stuff that tries to pass off as observations on gender equations. 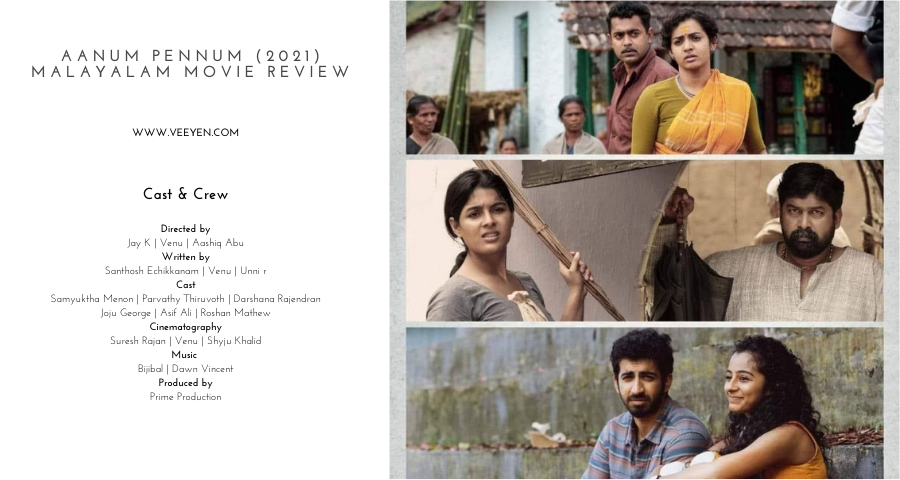 The thematic consistency across the three films in the anthology ‘Aanum Pennum’ notwithstanding, the film is a disappointment with two of the three segments hardly leaving a mark. That said, exploring the consequences of the choices that they make, the female protagonists in all three films do surpass the men in their lives in manners that are arguably unconventional.

‘Aanum Pennum’ starts off with Jay K’s ‘Savitri’, wherein a Communist woman (Samyuktha Menon) takes refuge in an affluent Nair household, while on the run from the cops.  The randy landlord (Joju George) soon casts his eyes on her, and coerces her to accept his advances as a Kathakali performance is on in full swing.

Director Venu’s ‘Rachiyamma’ is based on Uroob’s work by the same name, and has Asif Ali cast in the role of a young clerk posted at a tea estate. He is taken aback by the milk vendor Rachiyamma (Parvathy Thiruvothu) and her ways, and is drawn closer to the woman as she takes to nursing him back to good health after a short stint of chicken pox that strikes him down. 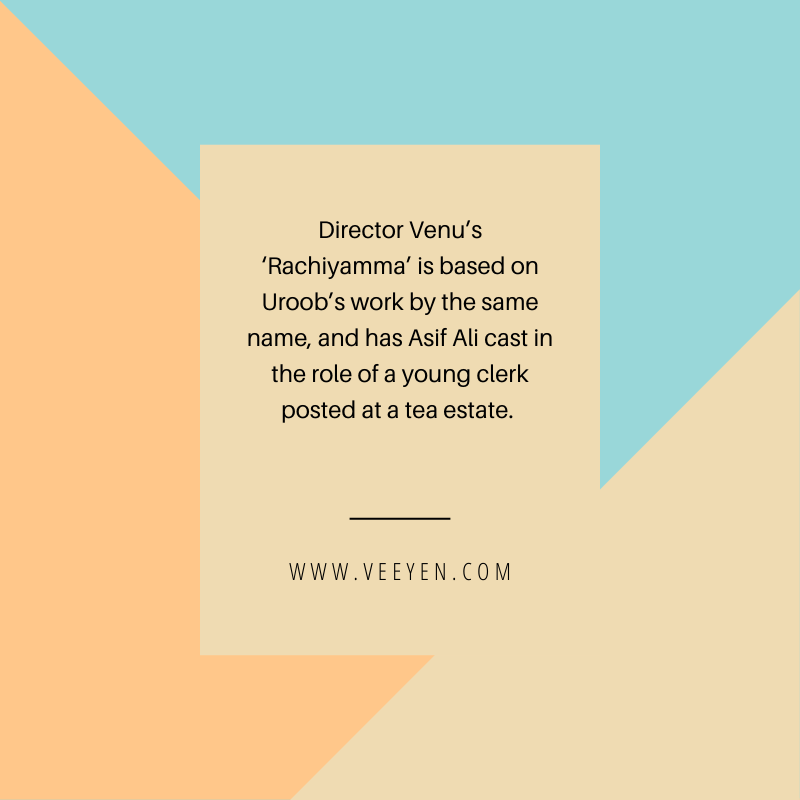 Unni R’s ‘Cherukkanum Pennum’ that has been caught on film as ‘Rani’, has been directed by Aashiq Abu and has Roshan Mathew and Darshana Rajendran in key roles. Collegemates who are also in love, the couple sets out on a one day amorous adventure, which has much far-reaching consequences than they had ever anticipated.

‘Savitri’ has been set in the immediate post-independence era, and looks and sounds far off on the timeline. What ruins the segment though is the purposiveness and affectations that permeates throughout, transforming it into a theatrical piece that appears way too loud and dramatic. The redeeming qualities to this film are minimum, and Savitri even seems exploitative at times, with the camera lasciviously panning the distressed woman’s body on the pretext of the male gaze. 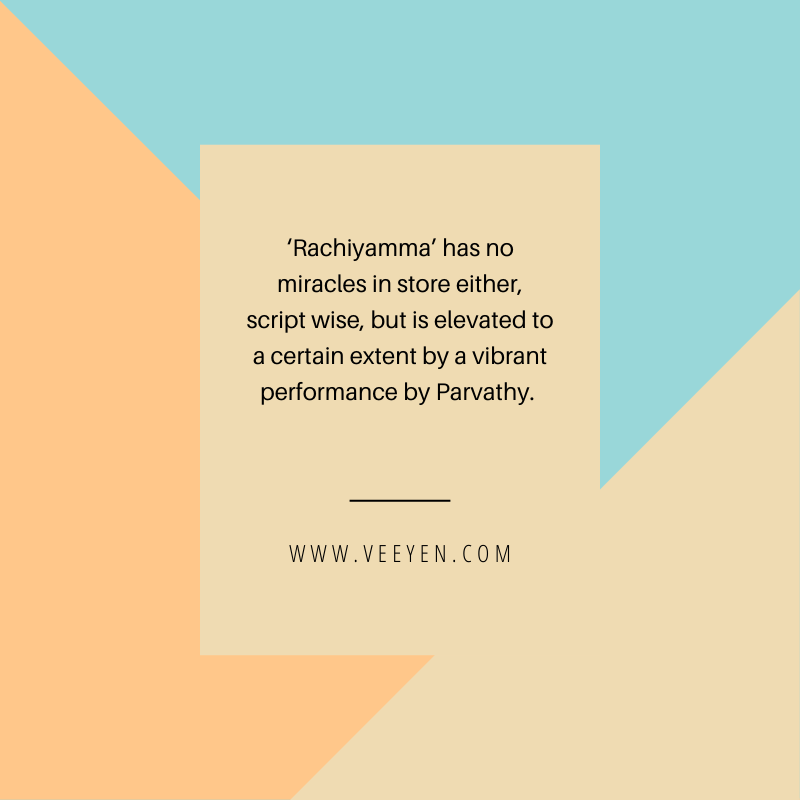 ‘Rachiyamma’ has no miracles in store either, script wise, but is elevated to a certain extent by a vibrant performance by Parvathy. The story is one that belongs to a different age altogether, and by far is one that talks of a likely lover who disappears overnight, much to the chagrin of a loner woman who had finally felt that she might have discovered love. The shrill laughter and the liveliness that Parvathy physically renders to the character make it an easy watch, though a far from compelling one.

The only one film that got my viewer antennae searching for signals was ‘Rani’, an adorable tiny gem and the third and final one of the lot. Unni R’s dialogues are crisp and earthy, and in no time ‘Rani’ sets the tone for the things to come. Despite very limited plot resources, this is the sole film in ‘Aanum Pennum’ that is solid, and much of what transpires on screen is courtesy some terrific performances  from both Roshan and Darshana. 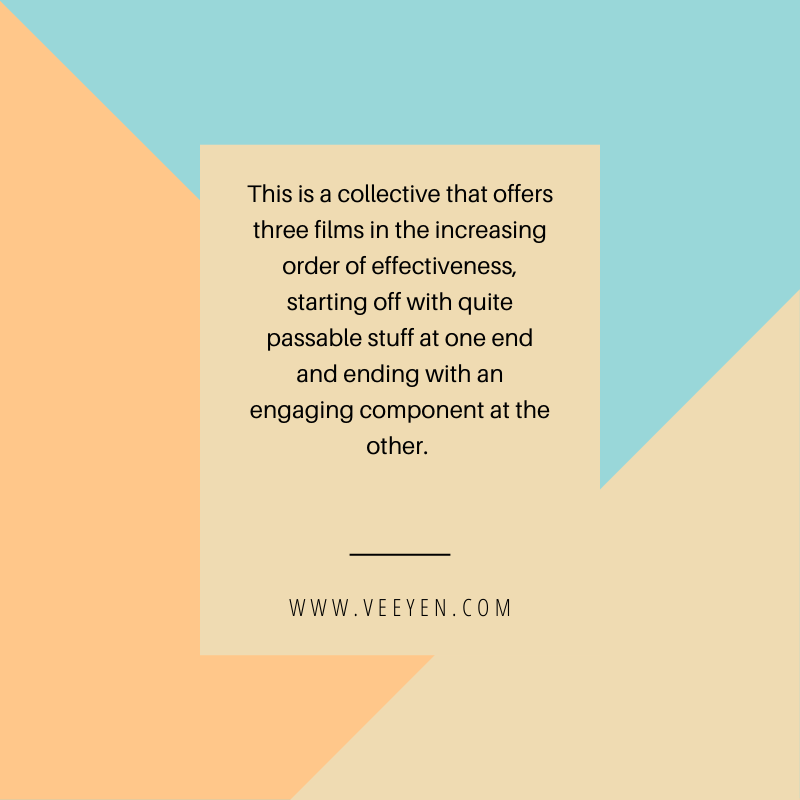 But wait! There is even a tiny surprise in store in the form of Nedumudi Venu and Kaviyoor Ponnamma who appear in the roles of an old couple, and who lend the tale an extra twist. And the final scene that sees Rani, in a much compromised and terrifying state, making a bold move towards the world that awaits her is by far, the best moment for me in ‘Aanum Pennum’.

This is a collective that offers three films in the increasing order of effectiveness, starting off with quite passable stuff at one end and ending with an engaging component at the other. As such, it does not spin off much in an interesting fresh direction, and for the most part makes do with some disposable stuff that tries to pass off as observations on gender equations.