Despite its many flaws, ‘Honey Bee’ did manage to drive in super keyed up youngsters to the cinema halls. Something which its sequel might not be able to achieve, given that it comes across as an exhausting and mostly needless retread that shouldn’t have been attempted in the first place!

Lal Jr’s third directorial outing, ‘Honey Bee 2: Celebrations’ is a film that gawks and squints back at you, for having decided to give it a go. I have been no great fan of ‘Honey Bee’ either, which is perhaps why, the sequel struck me as an unfunny film that will probably even have fans of the original film running for cover.

After much water has flown under the bridge where it all ended in ‘Honey Bee’, Sebastian (Asif Ali) and Angel (Bhavana) decide to tie the knot, as the sequel opens. Seban’s parents (Sreenivasan and Lena) are introduced, and it’s a long jaunt ahead for the movie and the viewers as Seban’s mates Ferno (Baburaj), Abu (Sreenath Bhasi) and Ambrose (Balu Varghese) join in.

It’s always with immense scepticism that a sequel is viewed. The going gets tough even further if the original film has had its share of critical fame, and if it had been a crowd pleaser instead, the expectations perhaps remain a notch lower. ‘Honey Bee’ falls into the latter category and despite the prospects of the sequel being very middling, it ends up a real downer however optimistic you had chosen to be.

There are multiple issues with the film, the primary one being a terribly unexciting script that is all over the place, and eventually serving no purpose, whatsoever. There is the sheer lethargy as well that is obvious throughout the entire length of the film, and it strikes as a surprise, since this is a film that one expects to keep the viewers in splits.

It should be remembered that ‘Honey Bee 2’ has some real talented people involved in it as the cast and crew, and yet its fratty humour is one that will leave you squirming in your seats. Unfortunately, it hasn’t been conveyed that oodles of chaos does not necessarily equate to fun, and after a while all you want is for the celebrations to be over, once and for all.

All those attempts at pulling at an emotional nerve do not work out either, and the film badly loses its balance and looks already to topple down any moment. And with no story line in sight, no resurrection for the ruins looks possible either, and ‘Honey Bee 2: Celebrations’ merely wheezes from one lame event to the next.

I have got nothing against adult humour in a film if it rakes up some laughter and gels in with the narrative, but ‘Honey Bee 2’ is no terrifically entertaining raunchy comedy either. True, it might tickle you a bit with a funny line here or there, but that’s as far as it goes when it comes to raising some mirth. 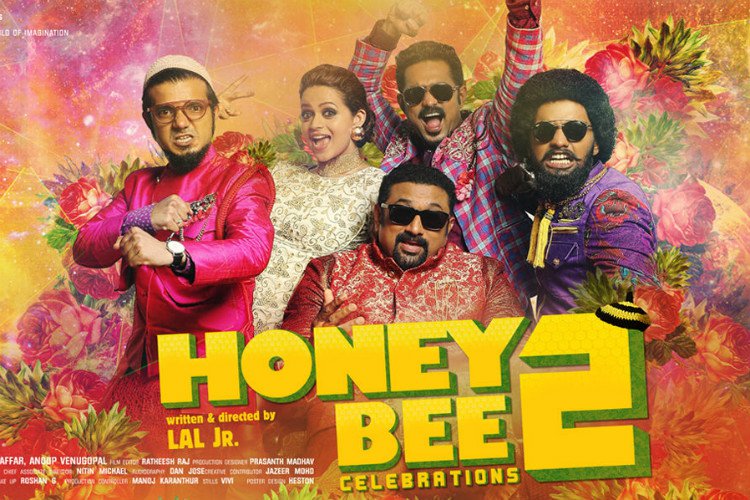 The cast is pretty much okay, though there is nothing spectacular that they come up with, whether it be the youngsters as Asif Ali, Bhavana or Balu Varghese or the seasoned actors as Lal, Sreenivasan or Lena. There is nothing much to be celebrated when it comes to the technicalities of the film either, whether it be the cinematography, the editing or the musical score.

Despite its many flaws, ‘Honey Bee’ did manage to drive in super keyed up youngsters to the cinema halls. Something which its sequel might not be able to achieve, given that it comes across as an exhausting and mostly needless retread that shouldn’t have been attempted in the first place!