‘Ishq’ marks the arrival of another gifted film maker on the scene, who presents before us a fascinating study on how the human mind ticks, when pushed to exceptionally extreme limits and beyond. A brutal exercise that blatantly confronts a very pertinent social issue, ‘Ishq’ is a film that is so difficult to endure, and which yet, should be undeniably endured. 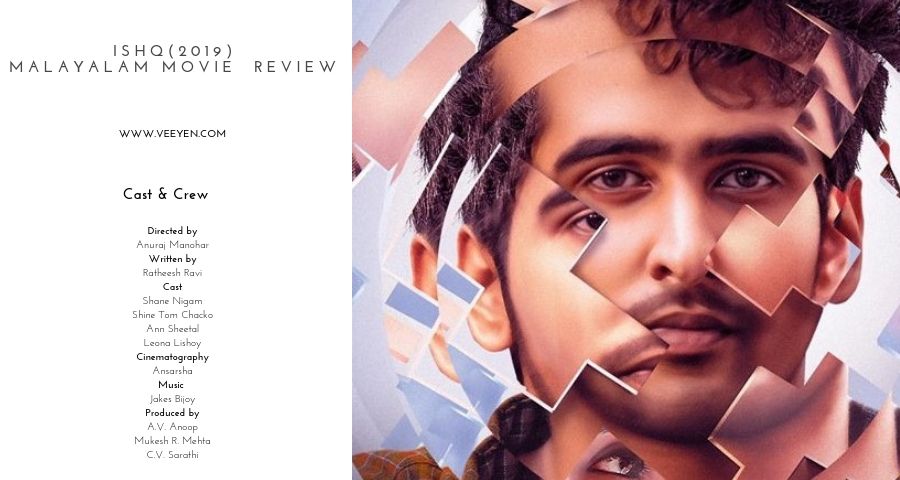 All it takes for your life to devastatingly twirl around on a wheel are a few ghastly hours that drag you away from the contentment and warmth that you had spun it up with; far away from the idyllic bit of universe that makes up your sheltered world. On the driveway to hell and back, the sights and sounds that surround you are of the altering kind; ones that strip you off the very last bit of persona that you had all the while assumed to be yours, and you lie bleeding and naked, astonished and flustered at what truly lies beneath your skin.

Anuraj Manohar’s directorial debut ‘Ishq’ is as its tagline claims, less of a love tale, albeit its lead being a love stricken techie who cannot even in broad daylight, see beyond the romance that rules his life. Sachi (Shane Nigam) is overwhelmed by love, and coyly reveals to his mother (Mala Parvathy) that he would love to tie the knot with his girlfriend Vasudha (Ann Sheetal), a post graduate student from Kottayam.

On Vasudha’s birthday, the couple hatches a grand plan to steal away from the city for a while. Awkwardly grinning and flashing his braced teeth, Sachi is all nerves as the two grab a Bombay toast at the Indian Coffee House, before speeding off on a long drive along the brightly lit roads. As the night and the late night love tales on the radio set in, an edgy Sachi demands a kiss. Vasudha refuses to comply and dismisses his request as inappropriate, reminding him that they are right on the road. Sachi thinks of an alternative and steers the car onto the deserted parking lot of a hospital, where one thing leads to another and they get cosy on the rear seat. And then, a flash light beams, and the earth beneath them caves in.

An intimidating visage makes its appearance, his mobile video camera capturing the horror that is writ large on the faces of the couple. Sachi quickly mumbles an apology and tries to get away, but the man – Alwyn (Shine Tom Chacko) – commences an ordeal from which there seems no return. He is soon joined by Mukundan (Jaffer Idukki), and as verbal threats give way to more terrifying demands, Sachi and Vasudha realize that their lives will never be the same again. 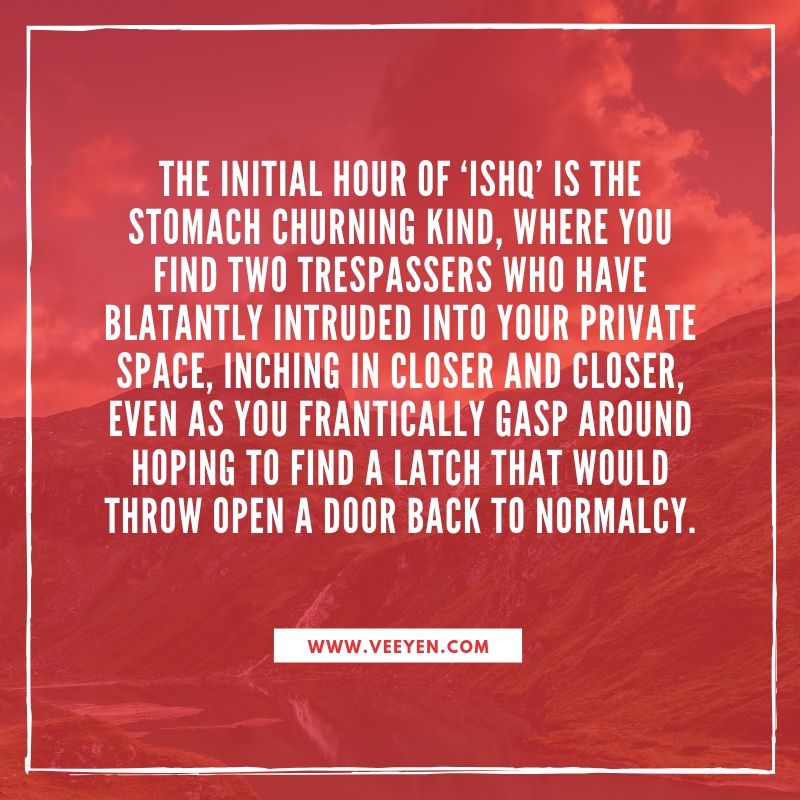 The initial hour of ‘Ishq’ is the stomach churning kind, where you find two trespassers who have blatantly intruded into your private space, inching in closer and closer, even as you frantically gasp around hoping to find a latch that would throw open a door back to normalcy. It’s a tormenting  trial without doubt; a harrowing nightmare that you wish was over and done with, but which shows no signs of drawing to a close.

There is nothing ambiguous about the emotions of the victims, and this is also the reason why their conflicts govern our entire experience of the film. The sadistic intensity that pervades throughout reaches mind boggling proportions when Alwyn climbs into the rear seat with Vasudha and snaps shut the car door as Mukundan lures Sachi away for a few moments. A petrified Sachi rushes back to find a beaming Alwyn inside with an awfully distraught Vasudha crouching towards a corner.

It’s precisely here that the film takes a veritable stand, and what follows is an extension of that very moment that proves to be decisive in the couple’s lives. I refuse to see the latter half as a resolution or a rational way out that the film maker has on offer for a severely grave issue that has made it to the headlines time and again in recent times. This isn’t a solution that is being proferred as it might probably be interpreted; rather it holds a mirror to what trauma of the extreme sort does to you, and even more importantly what you end up doing to cover up the ugly scars that have been left behind.

Sachi has been precisely etched out, and earlier on script writer Ratheesh Ravi lets him walk over to a bunch of men at a coffee table and reprimand one of them for having stared at his girlfriend. ‘Cheap show’, he shrugs when Vasudha questions him about the immediate reason behind the act, and hours later when  confronted by Alwyn, this foreboding young man is nowhere in sight. And there is a reason why, as horrifying as it might sound – a burdening sense of guilt for an act that is perceived to be depraved, and Sachi himself is no exception. 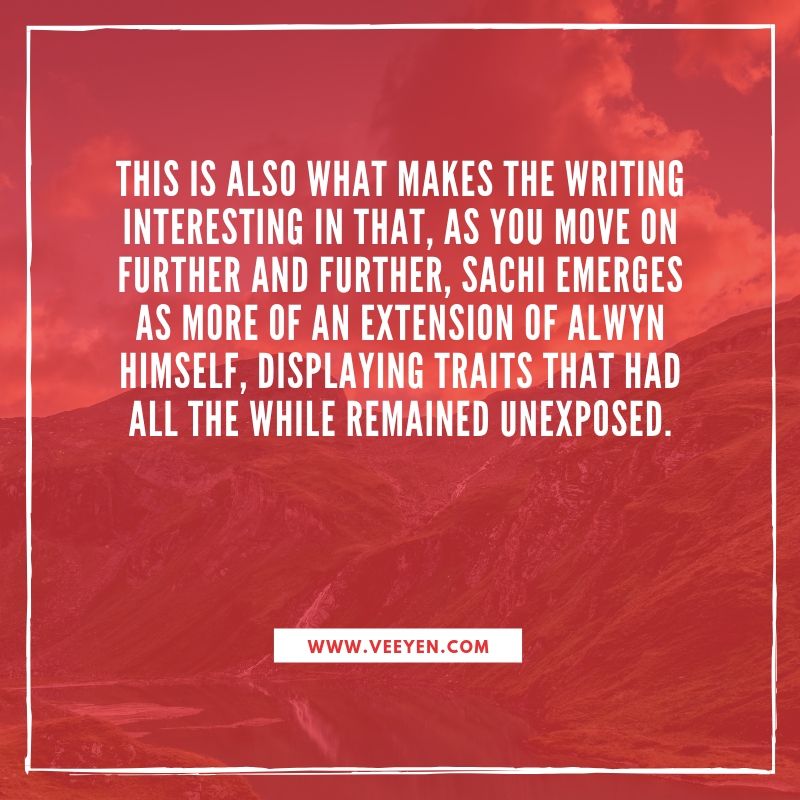 This is also what makes the writing interesting in that, as you move on further and further, Sachi emerges as more of an extension of Alwyn himself, displaying traits that had all the while remained unexposed. Barging into Alwyn’s home, he literally keeps his wife Maria (Leona Lishoy) and his young daughter captive, and sends Alwyn sprawling on the floor in no time. It is extremely effortless to view this as a plain act of redemption, but it is apparent that it’s much, much more than a mere attempt at revenge.

The male psyche in Sachi has been so brutally attacked, that he is shorn of everything that makes up the ‘man’ that he is. In his attempts to regain his blemished male makeup, he goes the extra length that probably not many of us would dare to, and returns triumphantly, the shreds of dignity and masculinity that he had regained from his assaulter thrown over his shoulders, hoping to wipe his slates clean and start anew. And his grin is finally back in place.

Not an easy walkover however lies in store, and with a thunderbolt of a climax, Anuraj seals up this black hearted affair with aplomb, in what could be considered as the most feminist and evocative statements on screen in recent times. In as much as a silent scene or two, the gender power equations tumble down, and the crowd breaks into an applause, and rightly so. 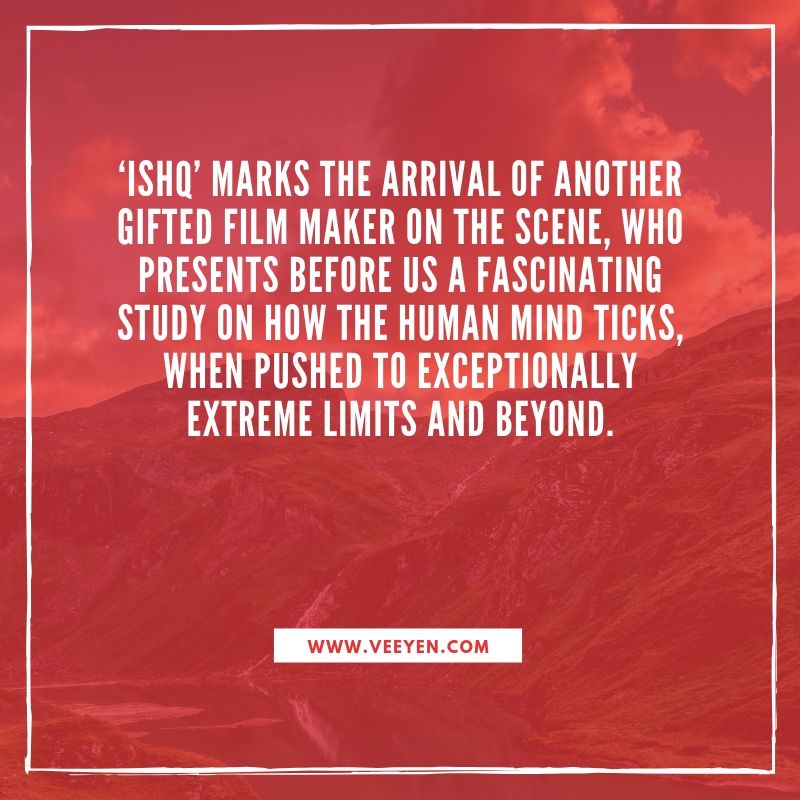 ‘Ishq’ has exemplary performances all around – Shane is unbelievably, delectably good, Shine and Jaffer Idukky slice through with icy performances, Ann Sheetal delivers a whopper feat and Leona comes up with a spot on act. Ansarsha has crafted the most diligent of frames, and the musical score by Jakes Bijoy competent.

‘Ishq’ marks the arrival of another gifted film maker on the scene, who presents before us a fascinating study on how the human mind ticks, when pushed to exceptionally extreme limits and beyond. A brutal exercise that blatantly confronts a very pertinent social issue, ‘Ishq’ is a film that is so difficult to endure, and which yet, should be undeniably endured.