‘My Story’ snuggles into its formulaic mould with ease, and settles down for a very conventional finale, after a couple of hours of romantic non-happenings. Sappy and corny by turns, its only claim to fame would be that it features two of the best actors in showbiz who despite all its daftness, give it their very best shot. 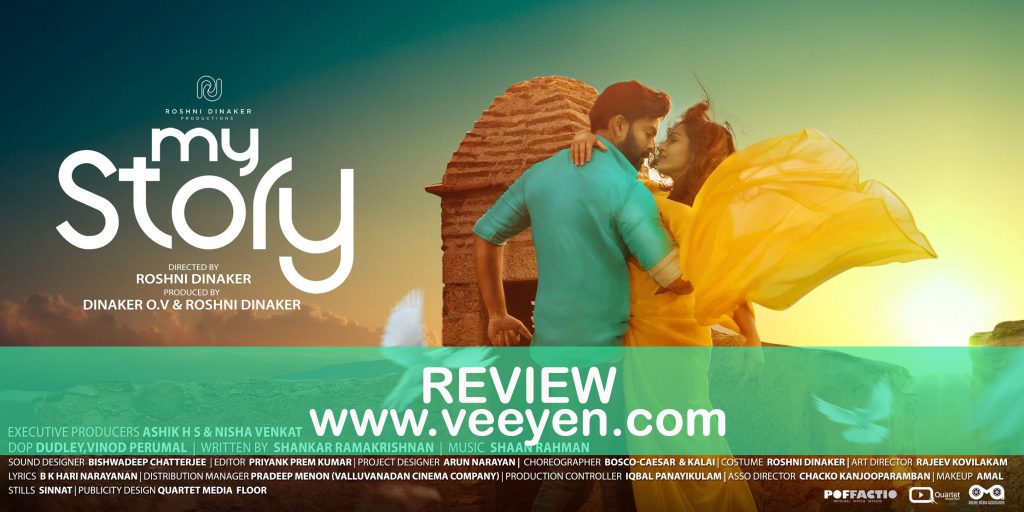 It’s all in picture perfect frames that Roshni Dinaker’s  ‘My Story’ unfolds, but ones the hollowness of which clearly ebb through. It’s all there in ample doses; the proclamation of love, the shedding of tears, the lamentation on the loss and what not, and yet it hardly leaves back anything for us to cling on to.

Dinaker’s ‘My Story’ in all fairness, might have had an intention to be a memorable saga of love, passion, loss and betrayal, but which is smashed to smithereens by a decrepit script that is all over the place. And with a story that is so run of the mill, it achieves infinitely less than what it must have strived and hoped to.

Jai (Prithviraj) is a hero aspirant in films, who has just grabbed his first major opportunity. He leaves on an outdoor shoot to Lisbon, with the rest of the film crew, where the leading lady Tara (Parvathy) develops a liking for him. Jai is taken aback, not only because Tara is the reigning super heroine in the industry, but also because she is engaged to David (Ganesh Venkitaraman), the producer of the film.

The scenic locales that are quite easy on the eyes are probably the one major reason why ‘My Story’ might be worth a watch. Beyond that it’s an excruciating journey, where the lead characters are as lost as the viewers following them around, and where it gets progressively unsettling with the passage of time.

Come to think of it, one wonders what difference it would have made if ‘My Story’ had shifted its setting to Chennai or Cochin, for instance. In all likeliness, very little, except that it would have robbed itself of the one redeeming factor that it is likely to be remembered for – the picturesque backdrop.

‘My Story’ is a film that so emphatically wants to be a celebration of love, and which falls into almost all the claptraps that await it. For one, this eternal love is never persuasively established, and almost all the instances when it tries to do so, are drenched in sheer melodrama. The final declaration of love occurs on a stage, before an empty auditorium, and you end up wondering if this is what love is all about.

The opening credits are nothing short of brilliant though, and the aesthetics of it, pure dazzling. Forget that it reminds you of the posters of Jake Gyllenhaal’s ‘Enemy’, and the titles unroll against a grey silhouette of the protagonist, with aerial visuals of a sprawling city brilliantly merged across. There is little of this radiance in what follows though.

‘My Story’ deserves neither of its lead actors, and while Prithvi almost breezes through with a performance that fleetingly strikes you as laborious, Parvathy tries hard to set the inconsistencies of the script straight through a tailored performance. Ganesh Venkitaraman is okay in a role that requires him to maintain a grimace throughout, and there are also actors as Manoj K Jayan, Nandu and Sona in supporting roles.

‘My Story’ snuggles into its formulaic mould with ease, and settles down for a very conventional finale, after a couple of hours of romantic non-happenings. Sappy and corny by turns, its only claim to fame would be that it features two of the best actors in showbiz who despite all its daftness, give it their very best shot.