Sethu’s film like many of its predecessors, is one that is obsessed with the charisma of its leading star, that everything else, including the plot and the narrative are tossed into the Kuttanadan backwaters.

It doesn’t take an analytical lens to identify the kind of film that ‘Oru Kuttanadan Blog’ plans to be, as you watch a group of young men making a beeline for Hariettan’s gala return from the Gulf. Loud proclamations are made as to how Hariettan has, over the years, transformed himself into a cult figure of sorts at Kuttanad, and shrill anticipations laid out as to how his landing back on his home ground would bring about changes of earth shattering proportions.

Hariettan (Mammootty) finally touches ground, and his passionate admirers back home have arranged for a massive, flamboyant reception. Flowers are showered on him as he gently walks by, past the long line of young women who have arrived on the scene, to ensure that the scene does not, by any chance fall short of glitz.

Hariettan murmurs amidst all the chaos that perhaps the welcome went a tad overboard, and we are quick to nod our heads in agreement. Sethu’s film like many of its predecessors, is one that is obsessed with the charisma of its leading star, that everything else, including the plot and the narrative are tossed into the Kuttanadan backwaters.

This is a tale of fixation; not just of the film maker, but of an entire village that looks upon the protagonist as the panacea to their troubles. The man, has a natural flair of spreading his charm around, and leaves almost everyone around fascinated; the new Sub Inspector (Shamna Kasim), for instance takes an instant liking towards him, and she is just one among the countless admirers who find their knee caps loosened when he strolls by. 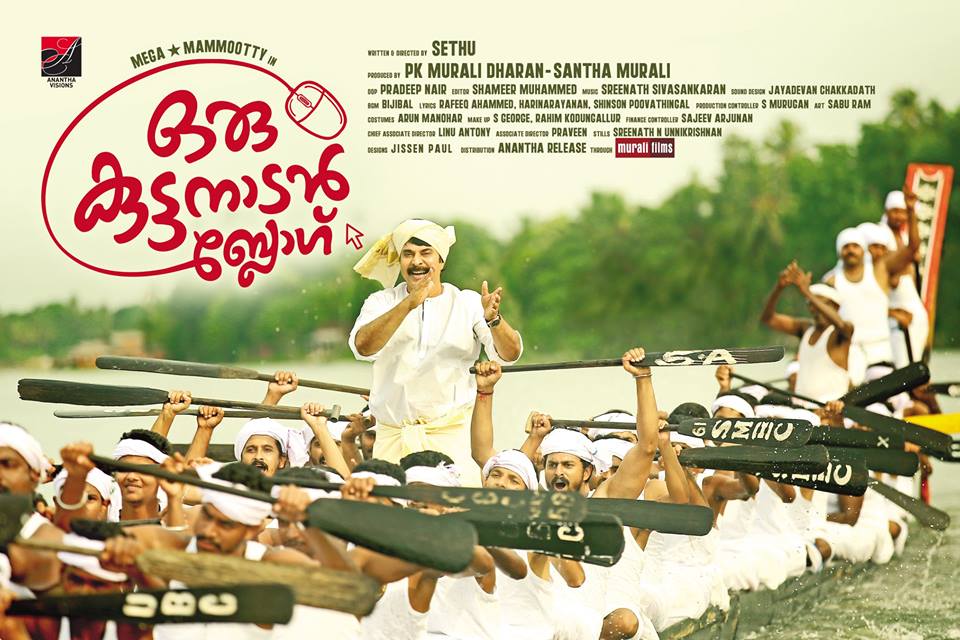 Along comes Sreeja (Raai Laxmi), the woman with the perpetual umbrella grasp, who makes Hari’s usually nonchalant eyes pop out. Flashback time and those customary shots at the school where a teenager used to be obsessed with a school mate, and memories come flooding back to Hari. His friends insist that he makes a fresh move, and Sreeja responds in all earnestness.

There are a few disastrously choreographed songs that budge into the plotline every now and then arrives the predictable moment of misunderstanding,  when Hari would find himself all alone. The twist arrives when the man is accused of a crime that he did not commit, but he decides to fight and give it back in all possible ways that he can.

There is hardly anything redeeming about Mammootty’s performance in ‘Oru Kuttanadan Blog’ and at best, it looks like a feeble extension to the several similar roles that he has already done in his illustrious career. Shamna Kasim does spring a surprise though, in a role that has been ridiculously penned, which she efficiently covers up with a positive performance. There is Anu Sithara who also does a competent job, while Raai Laxmi just about manages to make do with whatever she has been offered.

Meanwhile, somewhere far away, in some far off country, a Malayali couple (Sunny Wayne and Ananya) mumble sweet nothings, nostalgia and more Hariettan mantras, as they browse through the Kuttanadan Blog. Hariettan wins the final battle, and you head back home. Nothing lost, and certainly nothing gained.