‘Puthan Panam’ is a film that is conspicuous by the absence of a director and a writer whom we hold close to our hearts. It’s a lackadaisical film that is as cold as the revolver around which it revolves; a tangled hodgepodge of ideas that is stretched to ridiculous extremes. 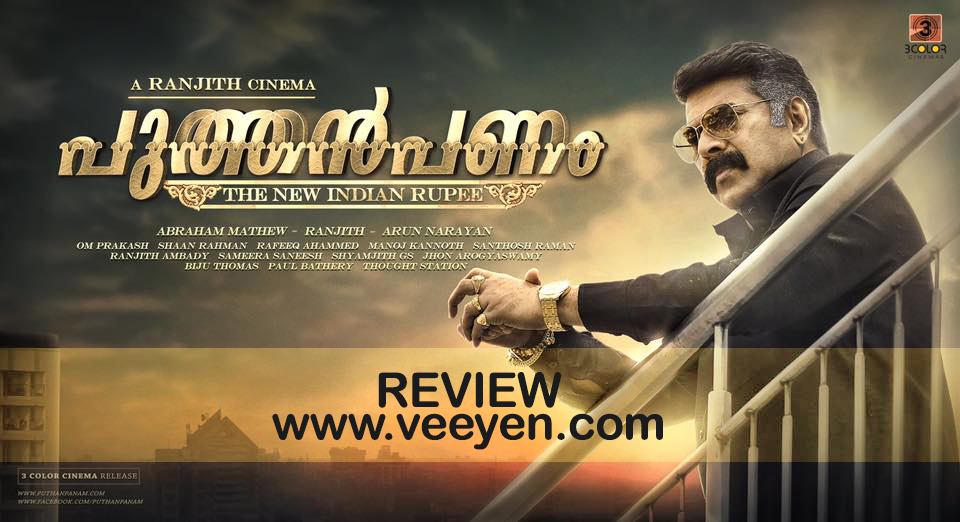 As unbelievable as it may sound,  Ranjith seems to have meandered down a winding trail in his new film ‘Puthan Panam’, where he orchestrates an elaborate symphony that in the end, strikes us as little more than chaos. With a palpably absent focus on characterization, ‘Puthan Panam’ is a slog of a film that has a few hits, but mostly misses.

Shenoy (Mammootty) realizes that his former business partner (Saikumar) has royally taken him for a ride, when he sees that the twenty five crores of Indian rupees that the latter offered him to finish off a business agreement is rendered invalid after an hour, with the Prime Minister announcing that all five hundred and one thousand Indian rupee notes will cease to be legitimate currency after midnight. Determined to make him pay penance, Shenoy and his aides head to Cochin, where one thing leads to another and soon there is a dead body to answer for. 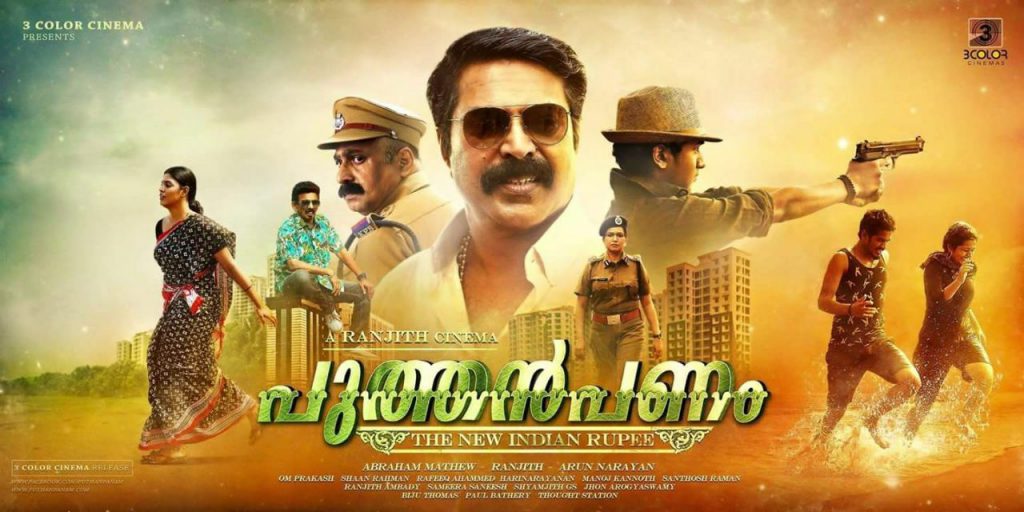 If you thought that this was a film about demonetization, you better think again. Probably one of the most deceptive titles in recent times, ‘Puthan Panam’ does not even talk half the economics that we had seen in Ranjith’s own incredibly engaging ‘Indian Rupee’. To set things straight, ‘The New Indian Rupee’ does not offer a statement (political or otherwise) on the currency note issue, and apart from the fact that it propels a dawdling movie into its momentum, demonetization and its aftermath serve no purpose in it whatsoever.

There is a parallel track that involves a Tamil boy Muthu (Swaraj Gramika) and his mother Sundari (Iniya) that runs alongside Shenoy’s antics in Cochin. The two plot lines meet at a point, though it makes no difference to the tone of the film. In endowing Muthu with heroic attributes, the writing goes awry, and gun shots are fired repeatedly; not many questions are asked. 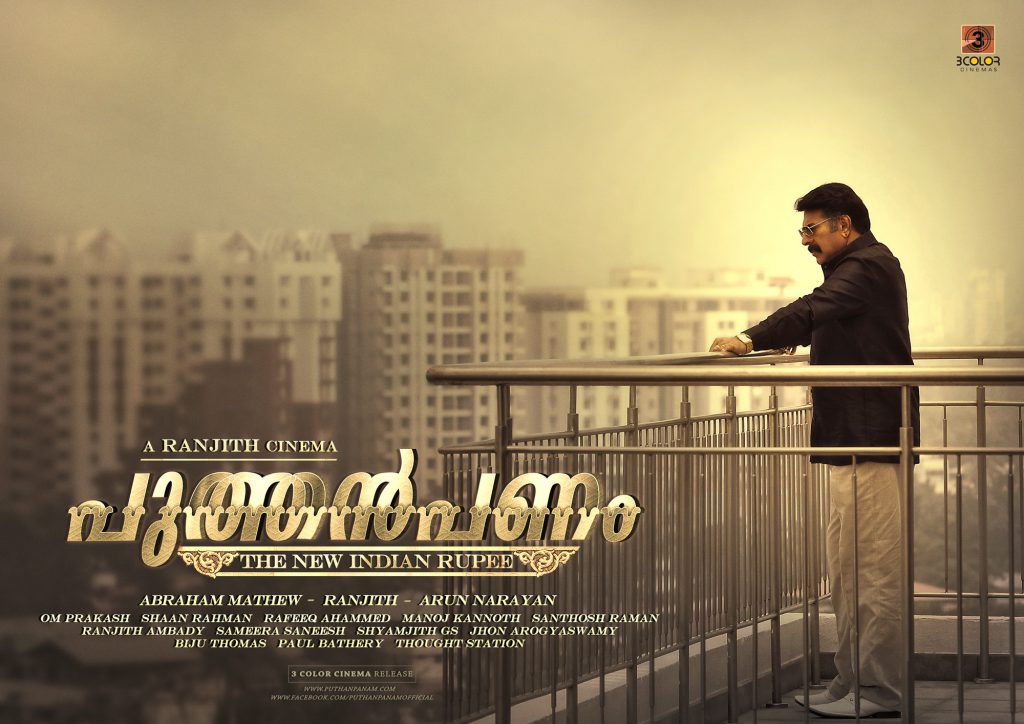 There is only one scene where Shenoy gets to display his prowess, and it occurs towards the climax, when he emerges out of his car, engulfed in a cloud of dust. He extends a hand to the browbeaten lot, before poking up a young man hurling him off the way like a speck of dirt. A bit far away, on a boat deck, a bunch of local goons sit in wait, to be hooked and twirled around by the Shenoy fist. Soon they take to the air, as Shenoy unleashes his fury on them, and clears the deck off in a matter of minutes. Call it spine chilling heroism or plain embarrassing fantasy – the choice is yours.

The Kasaragod slang that is very obviously the highlight of the film, also proves to be one of its major snags, since many of the dialogues in it are totally lost on the viewers on account of its intricacy and unfamiliarity. A few attempts are made to further shed light on the implication of the terms used, but this indistinctiveness largely spoils things for the audience. 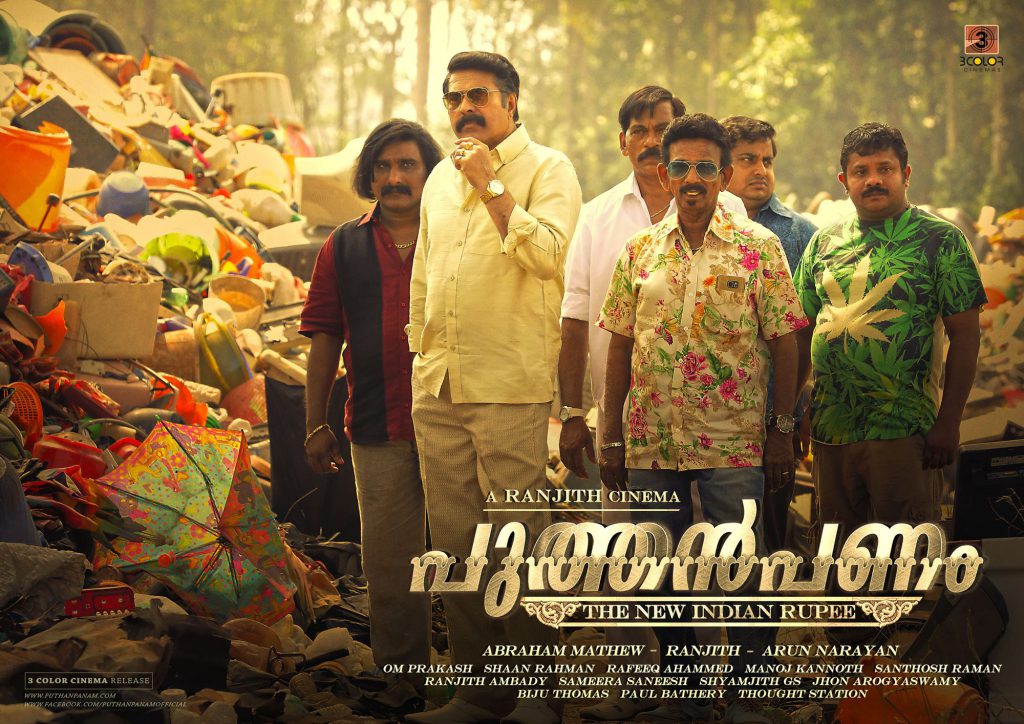 Mammootty as Shenoy looks and walks the Mr. Moneybags that he is, but there is hardly anything redeeming about this role,  that requires an actor of his stature. And it’s neither Mamukkoya sporting Polka shirts or Siddique flashing his baldpate who emerges the life saver in the film, but Baiju, who plays a petty criminal who utters a few hilarious asides on more than an occasion. Swaraj Gramika makes a promising debut in a role that has tinges of a hyperbole written all over it.

‘Puthan Panam’ is a film that is conspicuous by the absence of a director and a writer whom we hold close to our hearts. It’s a lackadaisical film that is as cold as the revolver around which it revolves; a tangled hodgepodge of ideas that is stretched to ridiculous extremes.