Despite the showers having finally arrived after playing tardy for a while and the chill in the air around, film maker Girish A D props up a ripe watermelon right before you and slices off its sturdy top, unravelling the bright red pith that lies within, studded with glistening black seeds. Snatching a ladle off the shelves, he drives it straight in, scooping out oodles of mushy melon and dropping them straight onto a pitcher, even as you sit and watch in amazement, your mouths all set for a ship sail and your throats a tad drier than usual. 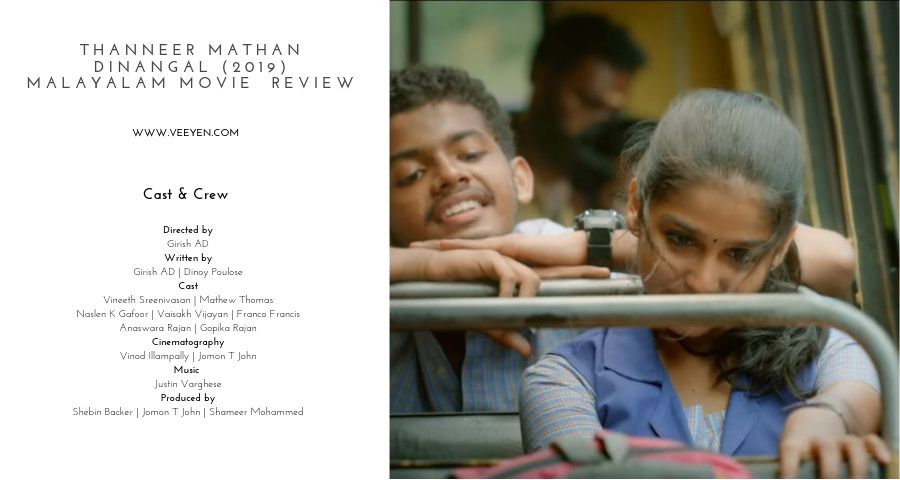 Despite the showers having finally arrived after playing tardy for a while and the chill in the air around, film maker Girish A D props up a ripe watermelon right before you and slices off its sturdy top, unravelling the bright red pith that lies within, studded with glistening black seeds. Snatching a ladle off the shelves, he drives it straight in, scooping out oodles of mushy melon and dropping them straight onto a pitcher, even as you sit and watch in amazement, your mouths all set for a ship sail and your throats a tad drier than usual.

It’s a heady, chunky mix that Girish offers us; one that he loads up with oodles of adolescence and the intricacies that render the phase a fascinating combo of extremes. He lets loose on screen a bunch of extremely identifiable,  unsure youngsters busy shedding off their childhood skin peels and doubtfully, yet keenly marching on to the brink of adulthood, mesmerized by the sights and sounds around, that all at once seem to have assumed an import that is spanking new. 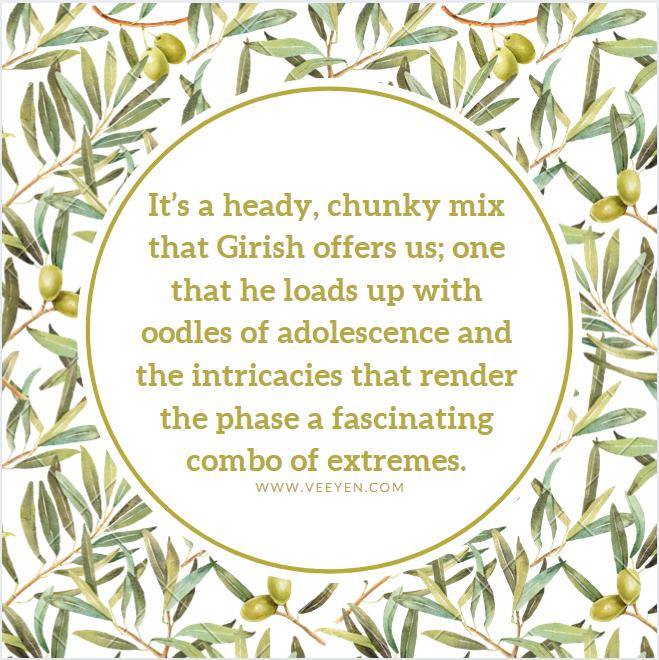 Jason (Mathew Thomas) walks into the Plus One Science class with aplomb, and has his classmates whispering to each other in no time as to what a bloated paper bag he seems to be. A surprise class test in the class serves as the needle that would puncture the air balloon that Jason is, and shedding his pretentious ways, he diverts his attention to something much more appealing than science – Keerthi (Anaswara Rajan), the pretty girl who from a few benches across has his heart swinging back and forth like the simple pendulum in the Physics lab.

When Ravi (Vineeth Sreenivasan), a dashing, young Malayalam lecturer walks in, the girls in the class who had had their focus fixed on the debonair driver of the private bus all the while, shift gears and put up their ogling glasses to take a closer look. They are enthralled by what they see and giggle away to glory, much to the dismay of Jason, who has by now, uttered what he believes to be a proposal over the phone to Keerthi, and has received a curt ‘No’ as an answer. 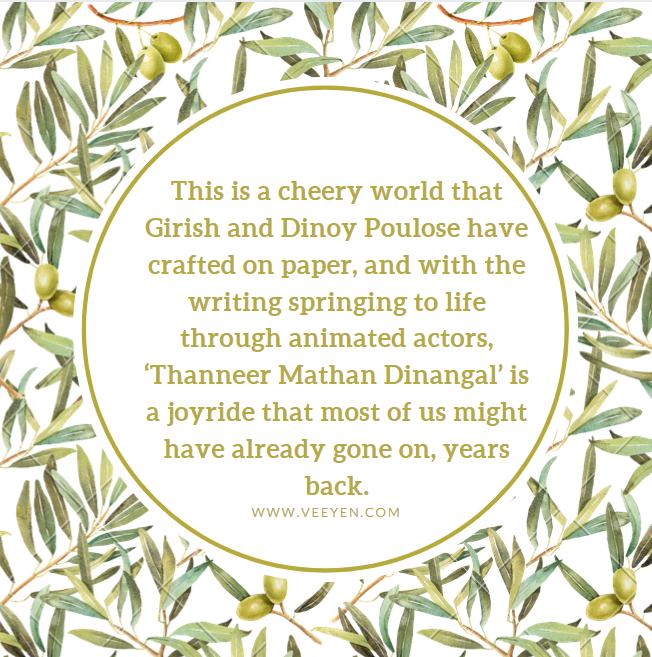 This is a cheery world that Girish and Dinoy Poulose have crafted on paper, and with the writing springing to life through animated actors, ‘Thanneer Mathan Dinangal’ is a joyride that most of us might have already gone on, years back. Growing up is a captivating process, without doubt, and this is a film that takes you further back on time travel, and drops you down on a campus, where you had first sat down to spin your dreams, where you had first guffawed at the crude jokes that were hushedly passed around, where you had first bruised a bit more than your knees and where you had first blinked your uncontainable tears down.

As ironic as it may sound, what makes ‘Thanneer Mathan Dinangal’ the kind of enterprising film that it is, is its ordinariness – a quaint familiarity that grabs you by your arm and walks you down to a nutmeg grove, where Keerthi and Jason, bite into the ripe fruits as they walk along, murmuring sweet nothings to each other.  This is syrupy nostalgia without doubt, and we readily indulge in this voyeuristic stroll with them, nodding our heads and grinning at their slightly amorous exchanges but unlike them, thinking of the heartbreak that is to follow.

‘Thanneer Mathan Dinangal’ scores incredibly high when it comes to characterization, and Jason surrounds himself with a bunch of adorable nitwits, who constantly keep us in splits. There is Melvin (Naslen K Gafoor) who in a couple of days in the Science class ascertains that his life is oriented towards humanities, and Dennis (Vaisakh Vijayan) who cannot think of a better name than Ambika for the fictional girlfriend whom he keeps bragging about. There is Linto (Franco Francis) who is spotted spending an unusual amount of time outside the Commerce class, and the apathetic Stephy (Gopika Ramesh) who almost misses the news and realization of a breakup amidst her lethargic sessions of nail clipping and dabbing face cream.

Back home, Jason has a rock star of an elder brother, Joyson (Dinoy Poulose), who productively spends the better part of the day, idly stretched out on the sofa, with the TV remote safe in his hands. He does venture out once in a while, and displays uncharacteristic enthusiasm when sent out on shopping errands to the meat store.

The school has its share of oddball elements as well, and while Ravi prances around leaving much more than a mere impression, the Principal (Irshad) is ecstatic at the upcoming cent percent results, that he staunchly aims to reap without fail. There is Aswathy Miss (Sree Renjini) who reads much more into the garland that Ravi accidentally drops over her, and the lecturers  Satheesh (Sajin Cherukayil) and Vigil (Arshad Ali) who get into an ugly brawl, with the students cheering them on and with one of them losing his dhoti in the process. 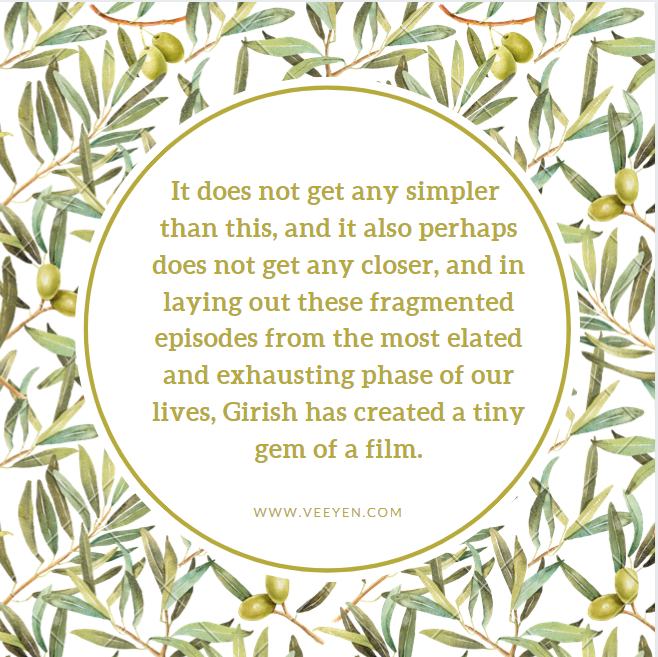 ‘Thanneer Mathan Dinangal’ is an affirmation that those long standing speeches and inexplicable words could be kept at bay, when it comes to yanking at the viewers’ hearts. It does not get any simpler than this, and it also perhaps does not get any closer, and in laying out these fragmented episodes from the most elated and exhausting phase of our lives, Girish has created a tiny gem of a film.

The dialogues that are mostly conversational are wound around incidents that are downright relatable. Even in moments of slight exaggeration, this film makes you want to grant them the benefit of doubt and believe in it, and it swerves back in no time and falls back into the groove, confirming that all is well.

This is a film maker who apparently has some real skill to keep the audience enraptured, and Girish is majorly aided by the sharp writing that very rarely goes off tangent. All said and done, if I were to pick a few quibbles, I certainly could, but ‘Thanneer Mathan Dinangal’ is not a film that deserves such nitpicking. Certainly not in the greater order of things.

Exemplary performances are in store, and all the young actors give it their very best, with not one, appearing out of place. I loved the boy pack in particular – Mathew Thomas, Naslen K Gafoor, Vaisakh Vijayan and Franco Francis – that set the screen on fire with their vitality, but the girls – Anaswara  Rajan and Gopika Ramesh – with terrific feats establish that they are no less efficient. Hugs to Vineeth Sreenivasan for having given the nod to a role as this, and a huge round of applause to Dinoy Poulose – writer and actor – who has massively scored and how!  Vinod Illampally and Jomon T John have crafted some stellar frames for the film, while the musical score by Justin Varghese is exquisite. 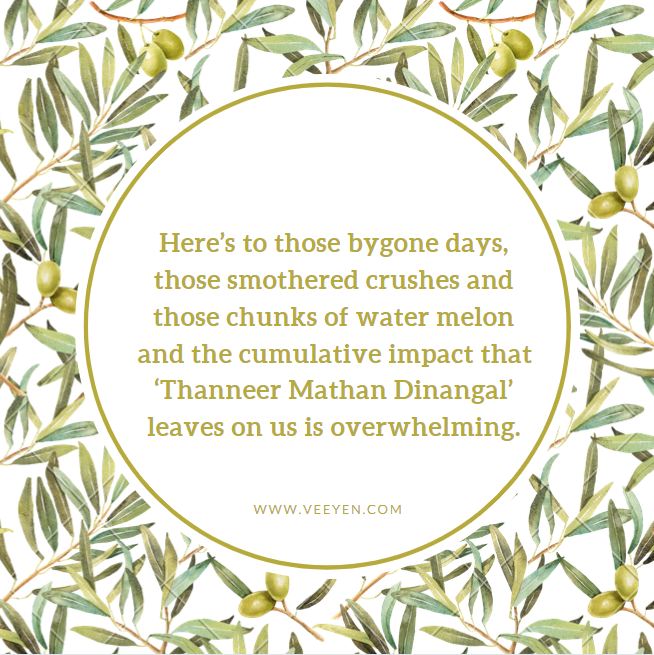 Here’s to those bygone days, those smothered crushes and those succulent chunks of water melon – the cumulative impact that ‘Thanneer Mathan Dinangal’ leaves on us is overwhelming. It would be unfair to compartmentalize it and hastily stack it up the ‘Coming of Age’ film category since on retrospect, it strikes you as much more than all that, and is a cinematic triumph that is as intimate and insightful as a film as this could be.