It could only be a real zany mind that would have the nerve to start off his film the way Dominic Arun does, that within minutes has the audience dropping their jaws – either in amazement or in morbid fear of what’s in store for the next couple of hours. The effect is pretty much similar to what Terry Zwigoff accomplishes with ‘Bad Santa’, where he adeptly replaces the chubby, soft footed, white bearded old man that we have long been accustomed to, with a drunken, bad-ass, swearing champ, Billy Bob Thornton. 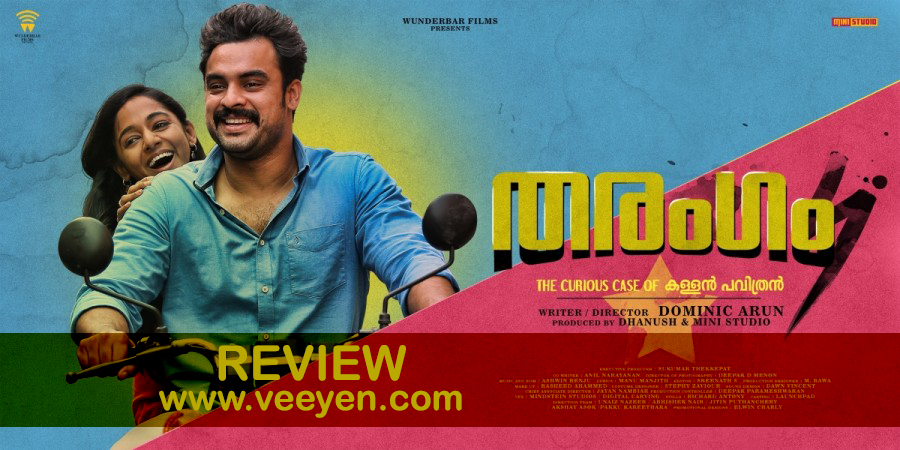 It isn’t easy when the realization strikes you hard. The God you have been praying to all along, the one to whom you had vouched your allegiance over and over again, does not sport a shaven visage. The one who has helped you on more occasions than one, to keep your head high above the water, has a paunch to boot. He (I even have a faint suspicion he doesn’t care a fig about turning the Capslock on here as a sign of reverence) frankly looks chock-full with all the prayers that keep streaming in 24 x 7 from the Human Radio station. And believe it or drop dead, He (can’t help it) suspiciously looks like Dileesh Pothen.

His paradise has an eerie resemblance to Ajit Loin Khan’s den in ‘Zanjeer’ and you brace yourself up for the moment when he would utter, ‘Lilly, Dont be Silly!’.  He doesn’t, and instead settles down looking quite troubled to the point of appearing a bit deranged, into an enormous leather couch, where he painfully explains to Kallan Pavithran (Achuthanandan) for what looks like the umpteenth time, why it isn’t easy being God. Pavithran has been around for a while, ever since he was smacked to death by the villagers for having stolen an idol from a temple, and his further generations have had to bear the brunt of it. Unfair, says Pavithran. You know the reason,  shrugs God. 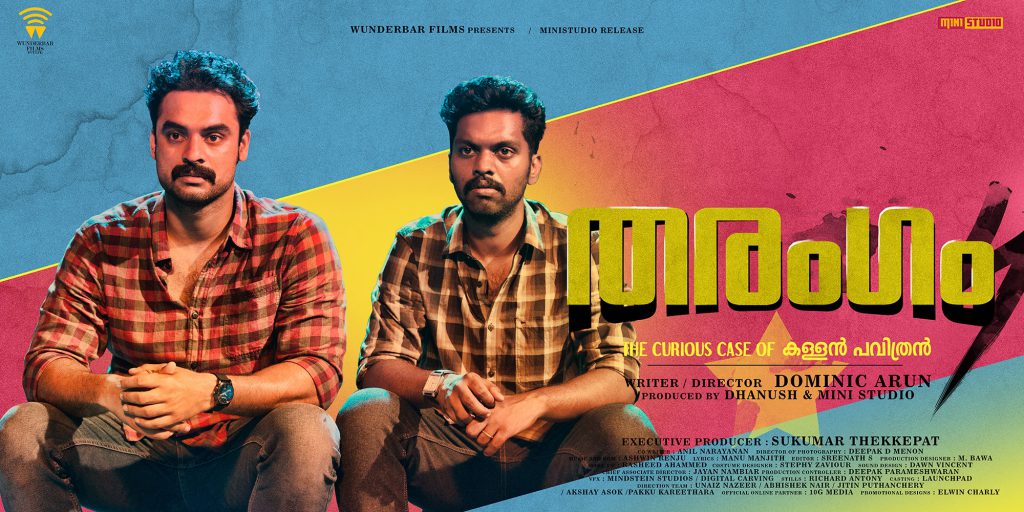 It could only be a real zany mind that would have the nerve to start off his film as this, and Dominic Arun within minutes has the audience dropping their jaws – either in amazement or in morbid fear of what’s in store for the next couple of hours. The effect is pretty much similar to what Terry Zwigoff accomplishes with ‘Bad Santa’, where he adeptly replaces the chubby, soft footed, white bearded old man that we had long been accustomed to, with a drunken, bad- ass, swearing champ, Billy Bob Thornton.

There have been recent films in Malayalam that have made us dip our fingers in the black humour sauce, most of which tasted quite bland. But ‘Tharangam’ is a wickedly dark movie and one crazy ride, a work of comic insanity that asks you to buckle your seat belts on, simply feel the air rush against your face and let things be.

Far away from paradise, two traffic cops Padmanabhan (Tovino Thomas) and Joy (Balu Varghese) find themselves suspended from service, and agree to keep track of Omana Thariyan’s (Neha Iyer) moves, on the insistence of her husband (Shammi Thilakan). Their objective is to make some quick money, but the duo ends up with much more than cash, with a corpse lying around and some blood to answer for.

Believe me, there is no story here. It’s rather a series of wild instances that are hooked together in unimaginable ways that make up ‘Tharangam’, and the filmscape is occupied by a bunch of screwball characters with their screws nowhere in sight. And there is the talk of the dreaded don Raghu, who had without a second thought driven a fork right into the eyes of a bearer who had asked him to keep his voice low, that completes the anomalous circle.

Padamanabhan shares his flat with his girlfriend Malathy (Shanthi Balachandran), who is an oddball in her own right. Constantly sporting a frown, she’s busy most of the time slamming doors on Pappan’s face, scaring the hell out of him with false pregnancy reports and testing his faithfulness through uncommon assessment procedures. Yet, their love-hate relationship is as real as it gets, and the hesitance that seeps clearly across, is what makes it very special.

There are a few instances when the going gets a bit strained, but these occasional lapses are hastily trounced by some clever machinations in the plot. Look back at it and you might see that nothing much has happened, and yet it’s a hell of a load that ‘Tharangam’ untrucks before you  as Pappan and Joy embark on a race with time. 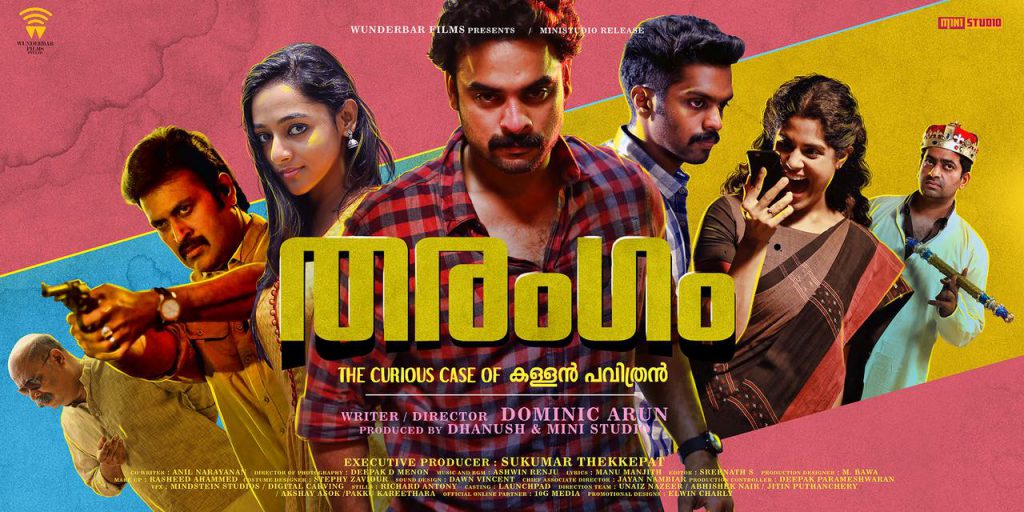 ‘Tharangam’ features exemplary performances from its women leads, and while Neha Iyer lends that extra bit of brawn to her superb portrayal of Omana, Shanthi Balachandran ensures that there isn’t a discord in depicting the super-suspicious, super-scowling Malu. A dashing looking Tovino effortlessly takes on the task of leading the pack, along with a highly restrained and hence doubly funny Balu Varghese, while actors as Saiju Kurup, Shammi Thilakan, Vijayaraghavan and Unni Mukundan (in an impressive extended cameo) leave a mark.

Dominic Arun’s film is a fearless experiment without doubt, and a wacky one at that, but as is the case with almost any film that dwells on dark humour, reactions are bound to border on the extreme. Side-splitting to me, twaddle to you is the easiest way to put it across. Bodies are stuffed into car trunks, faces bashed up black and blue and shady deals promised and soon swindled. And as usual, God gets up a bit late, throws his keys at the screeching birds of paradise, and mumbles incoherently to himself before starting off another busy day. Ah! These silly humans and their sillier ways!