‘Virus’ is an effectual ensemble piece that marvellously bonds together the pieces of a jigsaw, thereby rendering complete, a story of how fortitude eventually stamps over irrepressible fear. Emotionally pervasive and unnervingly real, It is also the kind of film that makes you go for a few extra dabs of your hand sanitizer, as you get all set to key down a review. 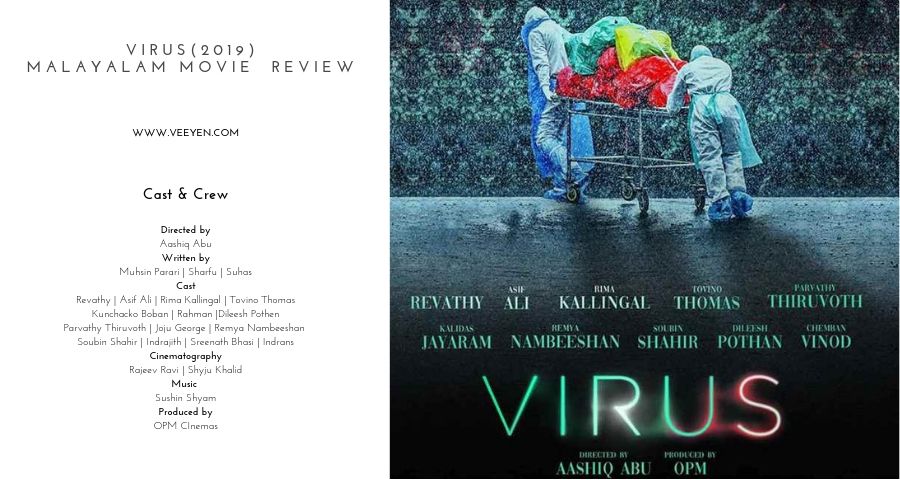 A screeching stretcher rams ahead on the screen as the patient on it – Akhila (Rima Kallingal) – visibly in severe trauma and apparently delirious, continually insists that she has tested negative for dengue fever, and that something else is severely wrong with her. The duty doctor Abid Rehman (Sreenath Bhasi) holds her hand and assures her that they will take care of her, and she is ushered away into the throngs of the casualty crowd, to be provided further medical attention. And in the darkness of the cinema hall, from some corner, a man lets out a short, garish cough.

The hypochondriac in you stands in rapt attention, and you can’t but turn your head towards the direction of the noise, that had by now, relapsed into silence. You scurry back an year, when friends from Calicut, darted messages across as to how in the course of a few days, a vibrant city had turned desolate, the multitudes that had swarmed its streets having retreated to the sheltered confines of their homes, even as reports of a killer virus that none had heard of till then, made it to the news headlines.

Aashiq Abu’s ‘Virus’ is indisputably a personal experience for any average Malayali who had been through the fright, the indecisiveness, the qualms, the terror and the eventual respite that a micro organism unleashed on a massive population that struggled to find its feet on track, and yet, which valiantly fought back with a fervour that the rest of the world watched in astonishment. It’s a throwback, and a befitting one at that, to troubled times that ebbed away under human resilience, leaving behind a spectacular tale of survival that will be discussed for ages to come. 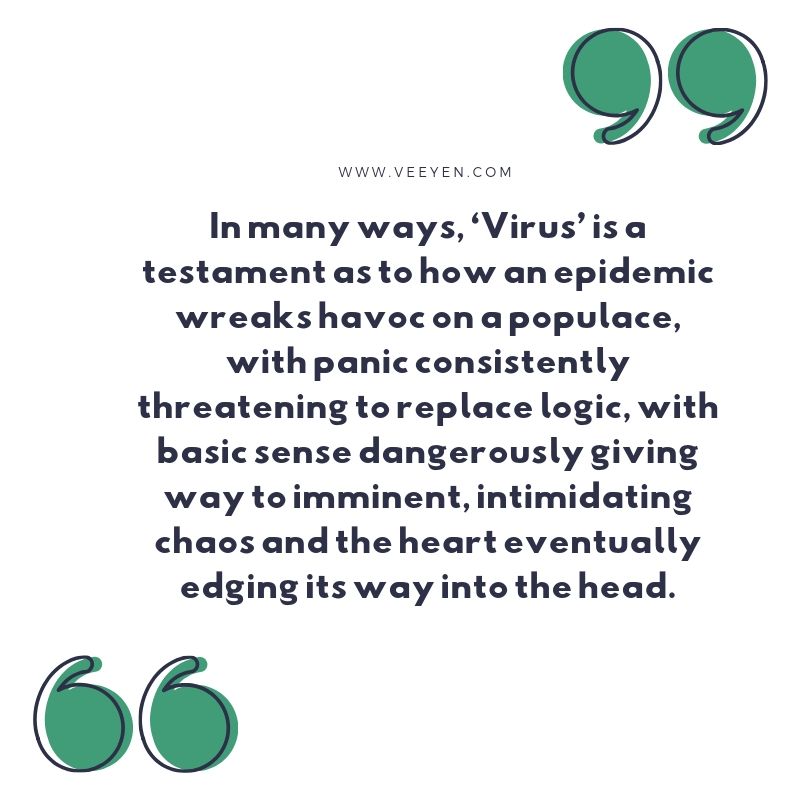 In many ways, ‘Virus’ is a testament as to how an epidemic wreaks havoc on a populace, with panic consistently threatening to replace logic, with basic sense dangerously giving way to imminent, intimidating chaos and the heart eventually edging its way into the head. It is here that a group of resolute men and women join hands, where bureaucracy leans over to lend an arm to science, where human grit prevails, persists and ultimately wins.

‘Virus’ is non-chronological in its narrative, and in-keeps its account with the tracks forward and backward in time, traversed by the real life heroes that make up its tale. With Dr. Rahim (Rahman) making the cautious announcement that we might actually be face to face with the dreaded Nipah virus, a dedicated team of medical professionals spring to action, unwavering in their endeavor to keep the disease from spreading any further. The health minister Pramila (Revathy), the district collector Paul Abraham (Tovino Thomas), Dr Suresh Rajan (Kunchacko Boban) and Dr. Smrithi (Poornima Indrajith) set up teams for parallel missions, that would track down the virus to its possible source, and one among them in particular led by a staunchly determined Dr. Anu (Parvathy Thiruvoth) comes up with reliable estimates of possible transmissions from the index patient and the ones that have been subsequently infected.

The social consequences of an outbreak as this cannot be ignored in any cinematic adaptation, and it becomes even more pertinent, through the portrayal of Babu (Joju George), an attendant at the government hospital, who readily agrees to offer his services despite the immense risks involved, on the promise of being made a permanent employee, along with scores of other daily wagers like him. Back home, his wife (Remya Nameeshan) and two kids are shunned due to suspicions of Babu being infected, and as the virus finally gives in, we get to see Babu buying a new backpack for his son, that would replace the older one that is totally in tatters. A year later, when one hears of the plight of the temporary staff at Calicut Medical College, ‘Virus’ should also serve as a reminder to assurances that have been made, but are yet to be realized.

In another subtle, yet poignant prompt as to how thankless the community often is, to the nursing profession, and how unappreciated their services are, we get to see Akhila talking over the phone to her husband in the Gulf. Her conversation is cut short by an infuriated remark from a bystander at the ward, and she rushes back to tend to Zachariah (Zakariya Mohammed), who is severely ill. Having contracted the disease from him, Akhila soon passes away, and her distraught husband Sandeep (Sharafudeen) dismally stands by, watching the fumes make their way up towards the sky through the furnace at the crematorium. 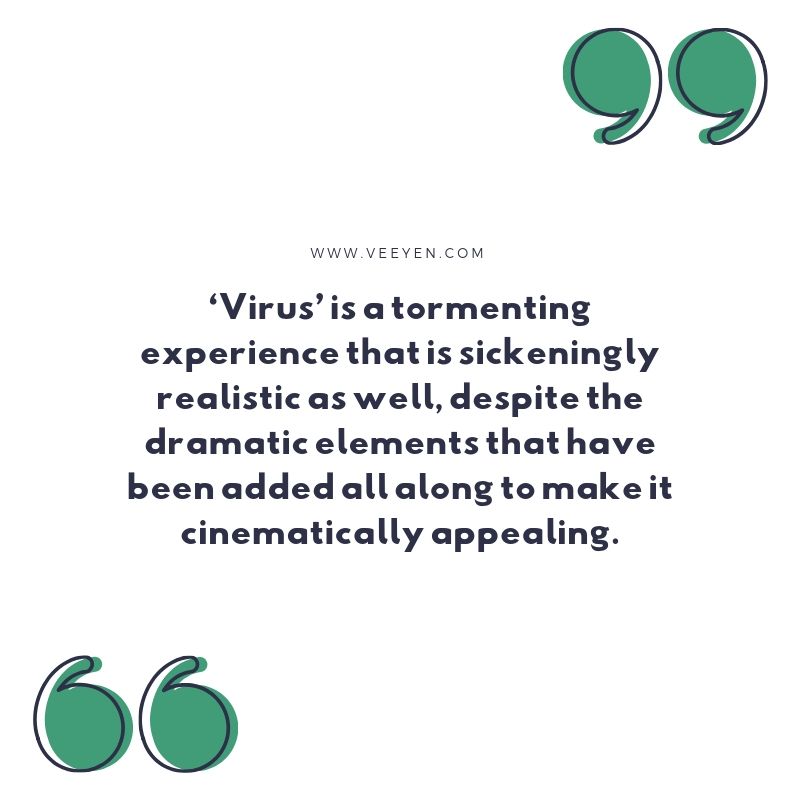 ‘Virus’ is a tormenting experience that is sickeningly realistic as well, despite the dramatic elements that have been added all along to make it cinematically appealing. It is here that the film delves into individual story lines, albeit briefly, to take a look at a few stories that hold significance. It is here that we get to see Zachariah and his journeys deep into the forest,  Unnikrishnan (Soubin Shahir) and his reckless ways, Vishnu (Asif Ali) and Anjali (Darshana Rajendran) and the secrets that lie buried within the folds of their relationship, the audacious doctor Baburaj (Indrajith) who is cross at not being able to light a smoke with the protective gear on him, Yahiya (Shebin Benson), his mother Jameela (Savithri Sreedharan) and what has been left behind in their shattered lives, Dr. Sarah Yakub (Madonna Sebastian) and her journey back to a life that had seemed not so long back, to be slipping away rapidly through her fingers and a police officer (Dileesh Pothen)who staunchly believes that his end is frightfully near.

To Aashiq Abu, this film must surely have been a litmus test; one that would stretch his experience several notches further into realms that have not been explored in Malayalam cinema as yet. This is a monumental film in that it sports a colossal cast, and teems with characters occupying distinctive positions on the plot build. Writers Muhsin Parari (who had bowled us over last year with the incredible ‘Sudani from Nigeria’), Sharfu and Suhas  brings in a chill – the unnerving kind that stealthily burrows itself deep beneath your skin – into the writing, that evenly spreads over, making you watchfully gaze over time and again to check if the air conditioning is all right.

There are of course the minor quibbles that could probably be overlooked in the larger scheme of things, but which nevertheless exist. About fifteen minutes into the film, with the tension gently building up, in perhaps what seems like an overenthusiastic attempt to visually capture the horror of the event that prevails, the film flashes a few scenes with text messages writ large that suddenly appear out of sync with the rest of the piece. There are also occasions when the fiction shows signs of spilling over, as in the scene where you get to see Vishnu sharing a bed with Anjali in the hospital, the very awkward query that Dr. Anu poses to Unnikrishnan or the feeble love track that connects Abid and Sarah together. The final speech by the minister herself sounds like one that deserved some better writing, and while it appears adequate, fails to raise the anticipated goose bumps.

The cast of ‘Virus’ is one that does total justice to its roles, and the film has been deftly caught on camera by Rajeev Ravi and Shyju Khalid, with an incredible background score by Sushin Shyam that retains the terror of the times. 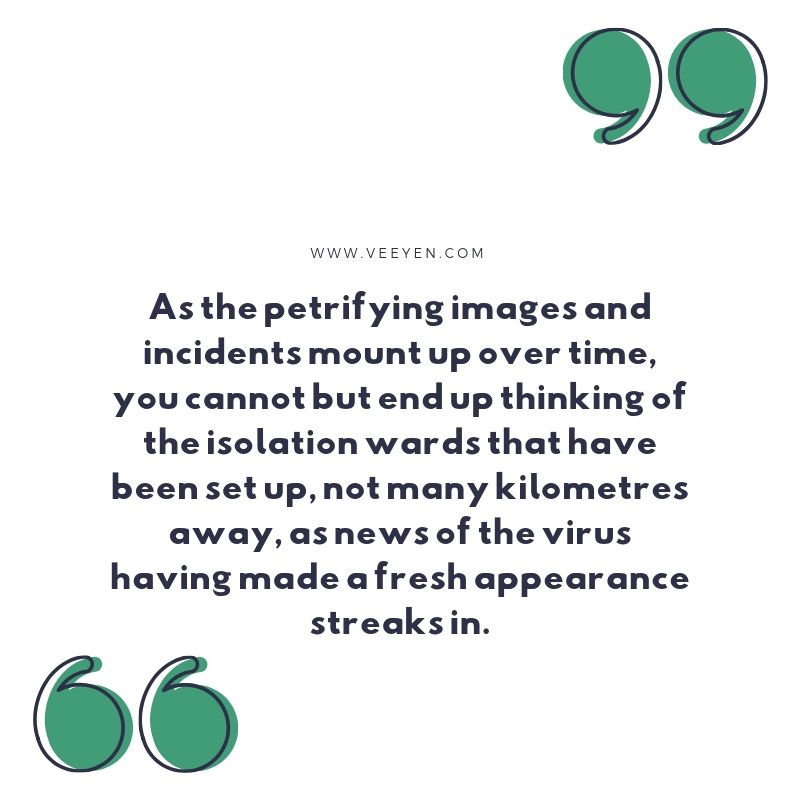 As the petrifying images and incidents mount up over time, you cannot but end up thinking of the isolation wards that have been set up, not many kilometres away from the cinema hall, as news of the virus having made a fresh appearance streaks in. ‘Virus’ is an effectual ensemble piece that marvellously bonds together the pieces of a jigsaw, thereby rendering complete, a story of how fortitude eventually stamps over irrepressible fear. Emotionally pervasive and unnervingly real, It is also the kind of film that makes you go for a few extra dabs of your hand sanitizer, as you get all set to key down a review.