‘Fukri’ tells a cloistered story that threatens to fall apart any moment, and leaves you too worn down to care for any of its key characters. A non-happening drama that is academic in execution, director Siddique’s latest has a narrative that creaks at every twist and turn. 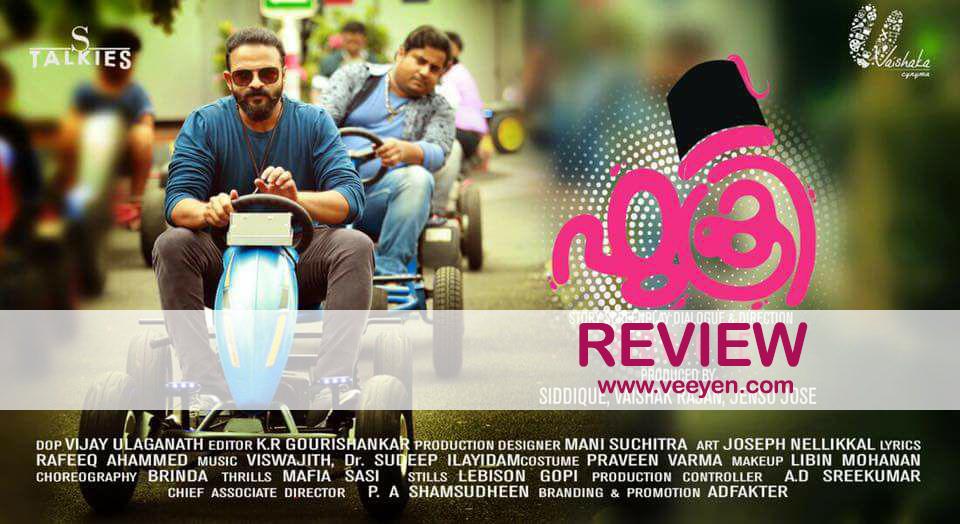 ‘Fukri’ tells a cloistered story that threatens to fall apart any moment, and leaves you too worn down to care for any of its key characters. A non-happening drama that is academic in execution, director Siddique’s latest has a narrative that creaks at every twist and turn.

Lucky (Jayasurya) is an Engineering dropout, who lands in a fix, having knocked down a temple and a mosque, after promising to refurbish both of them. When unable to keep his assurance, Lucky flees with his friends and makes do with petty assignments, in a city somewhere far away. When Nafsi (Prayaga Martin) and Sana (Shalini) – two girls studying in a local college – approach him with a request to play their guardian before the Principal, Lucky agrees, with appalling consequences.

One cannot help thinking of the foursome from ‘In Harihar Nagar’, when you watch Lucky and his gang break out into a song, and shake a leg or two as the number blares on. The remembrance, however is short-lived, and one can only sigh in exasperation, as ‘Fukri’ transgresses and rumbles along wearisome passageways, ending up not even remotely comparable to that classic comedy film of yore .

Don’t even get me started on the logic bits of this insanely long film that runs for one hundred and fifty five minutes. Someone walks in through your door and claims that he is your grandson, and you do not bat an eyelid before throwing open your arms to welcome him into your fold with a warm smile. Not just that, you set up a bedroom for his three screwball friends as well, and go on with your life, with these four strangers roaming about your place like there is no tomorrow. No questions are asked. No answers offered.

It is here that ‘Fukri’ degenerates into mere evening conformist sitcom material, and I suspect that some real serious tele-serial makers  might take offence at the comparison. Come to think of it, here is a guy who walks into two palatial households – one of them having a former Attorney General as a member – pretending to be someone he is not, and hoodwinks a horde of people, like you have seen nowhere else.

The comic scenes are few and very far in between, and ‘Fukri’ in fact offers strict competition to the director’s former film ‘King Liar’, when it comes to touching an overall low in humour. While almost every seasoned actor tries every trick in the trade to cook up a few laughs, along comes an auto rickshaw driver – an unfamiliar face – who brings the entire house down with his fleeting appearance. But these instances of real mirth are quite scarce in ‘Fukri’.

This is a total misfire from Jayasurya, who literally sleepwalks through the entire film, while the actors who play his cronies – Bhagath Manuel, Nirmal Palazhi and Kalabhavan Niyas – strive hard to keep the viewer amused. Prayaga Martin and Anu Sithara ham it up to the hilt, while Shalini delivers a mature performance. It’s for the umpteenth time that we get to see Siddique in a role as this, and this time it’s only his chic hair styling that saves the day. Lal, Joju George, John Kaipallil, KPAC Lalitha and Krishna Prabha are seen in key roles as well.

The musical score by Sudeep Elayidom and Viswajith is cacophonic, while the background score by Gopi Sundar comparatively fulfilling. Vijay Ulaganath does not craft any magic with his frames, and yet sees to it that the story telling is done with elan.

I would rather not stand back and closely inspect ‘Fukri’ for any more irrationality, lest I end up even more disgruntled than I am, right now.  All I would say is, not knowing where to dump its excess baggage, ‘Fukri’ is a sinking film that starts its plummet almost right from the start.