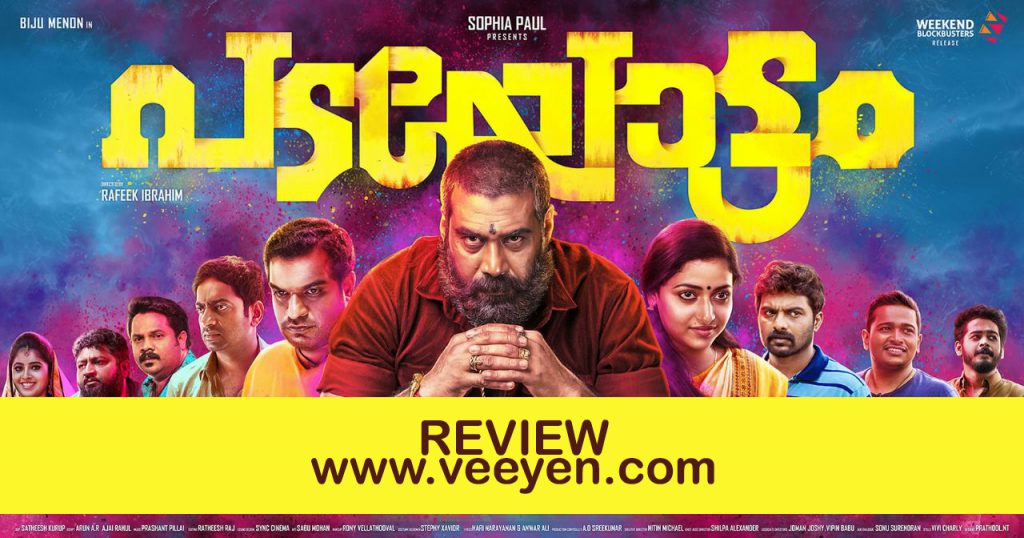 In all fairness, Rafeek Ibrahim’s ‘Padayottam’ sports a few moments of genuine hilarity, but finds its ambition hampered  by a script that endeavours to pump up an elaborate journey that lasts for about a couple of hours and a few minutes more, out of a mere vacuum. All the manic energy in it is almost undirected, with its ultimate intent barely rising above the level of spawning some nontoxic laughter.

Chengal Raghu (Biju Menon) is the life and soul of ‘Padayottam’; a good natured goon based in Trivandrum, who has people staggering up in veneration as he drives by on his bike. His assistance is sought by Senan (Dileesh Pothen), Sree (Saiju Kurup) and Renju (Sudhi Koppa) who have set out to wreak vengeance on the nameless man who has allegedly bashed up their dear pal Pinku (Basil Joseph) in what sounds like a late night street brawl. 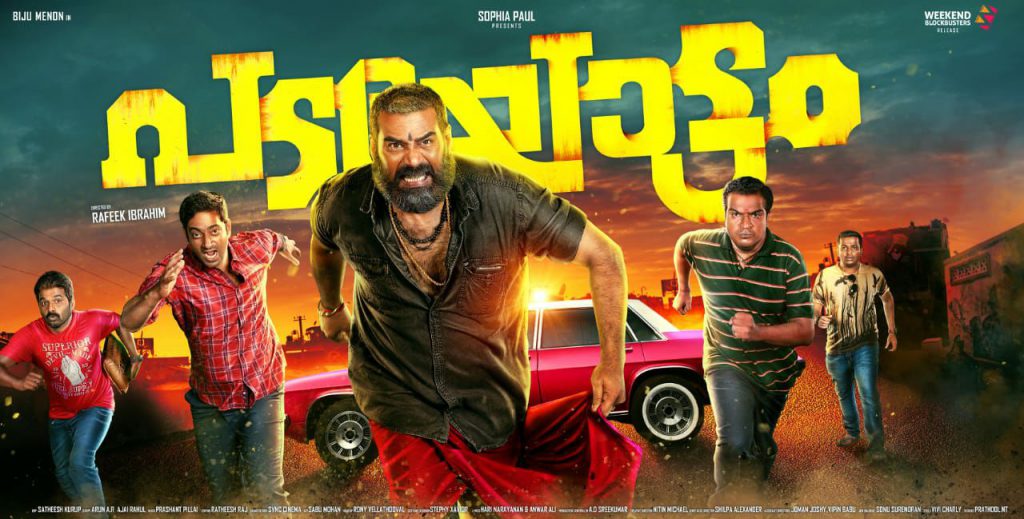 As a seething Pinku lies in eager wait on the hospital bed with a few bruises and broken bones, the four men set out for Kasaragod to grab the perpetrator by the neck and drag him back to Trivandrum, where he would be made to pay for his deeds once and for all. Things however aren’t that easy, as they soon realize, with their stuttering car deciding to break down, for starters.

‘Padayottam’ does remind you of Shaji Pappan and his gang, but Raghu is probably a bit more of a macho hero, given the spectacular stunts that he delivers in the climax. Writers Arun AR, Ajai Rahul and Sonu Surendran however refuse to attribute the gangster halo to him and transform him into more of a comic caricature who is as vulnerable as one gets; a man who throws up on bus journeys, who easily has stomach upsets and who, by the look of it has a heart of gold.

While Raghu himself offers more than enough material for a character study, there is his mother (Sethulekshmi) as well, who fawns over him with a watchful eye. They are again faintly reminiscent of the quaint mother-son duo in ‘Left Right Left’, and together have their share of fine moments in the film. 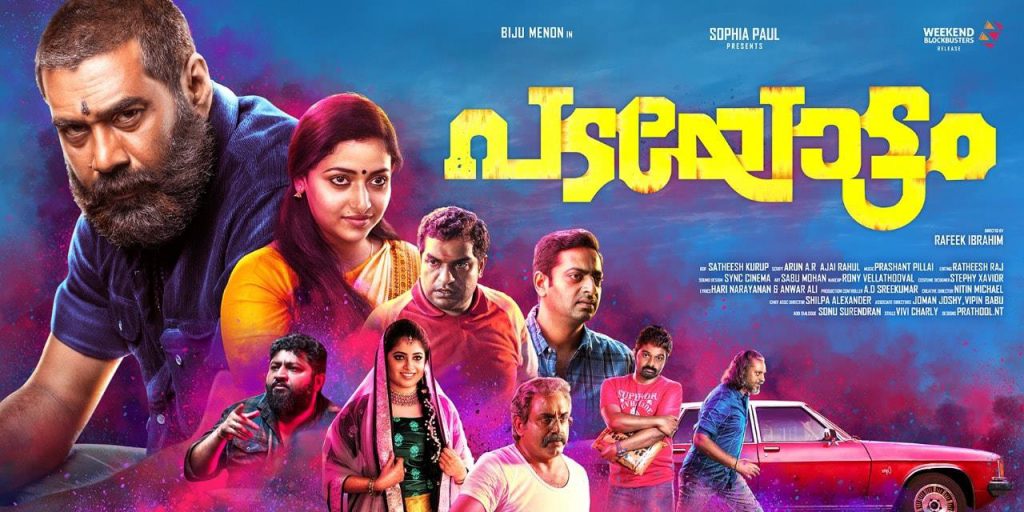 What cripples ‘Padayottam’ is the ludicrousness that drags its story down, even as the foursome travels across to Cochin, where they inadvertently get involved in an elopement, to Thrissur where they meet Britto (Lijo Jose Pellissery), a don who pushes people off terraces despite nurturing obsessive suicidal tendencies and finally to Kasaragod, where they at long last discover that the youngster they have been looking for is none other than Salman (Ganapathy), the son of dreaded gangster Samad (Rahul Dev).

The action mostly depends on the one liners that the characters mouth in quick succession, some of which do tickle your funny bone, and some others which seamlessly blend into the empty air around. It becomes apparent pretty soon that the hunt for a solid plot is bound to reach a dead end, and the very best you could do is to resignedly stretch back and let these men have all the loud fun.

There is also a brief bus sequence that involves Meera (Anu Sithara), a lecturer at a Polytechnic who shoots appreciative glances at Raghu, and who whispers to her colleague that the man is not just authoritative, but also benevolent. Apparently, she has had some first experience already, which is further augmented when Raghu, right before her eyes, teaches a lesson or two to a bunch of eve teasers who cross paths with him. Little purpose served except perhaps a discomforting demonstration of how adorable and heroic Raghu appears to the women around. 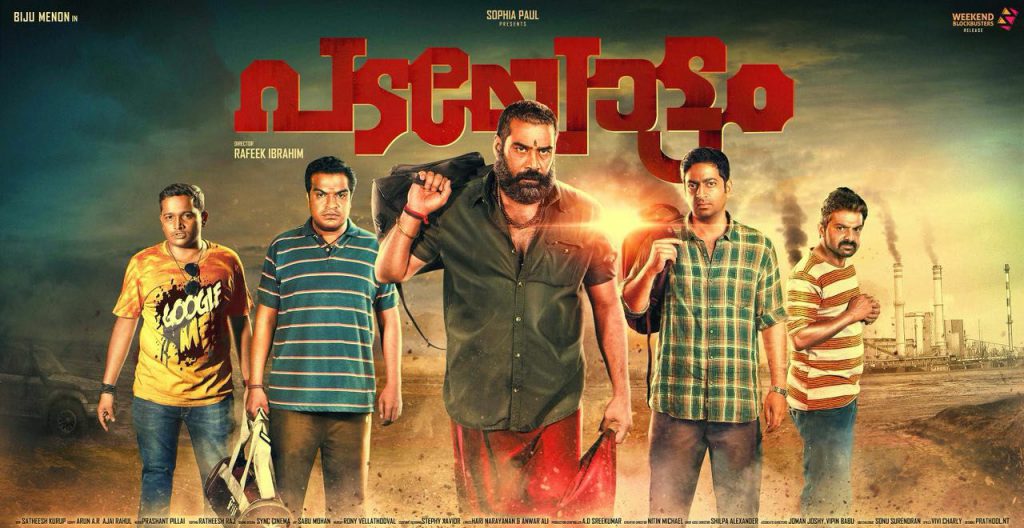 ‘Padayottam’ has six memorable performances; the leading one from Biju Menon who fits the role of the agreeable goon to the ‘T’, Sudhi Koppa who should be one of the most underused actors of the day, Sethulekshmi who wows yet again with the right blend of joviality and naiveté and Lijo and Basil who literally bring the house down on at least two separate occasions. Last but certainly not the least is fresh face Ravi Shankar who appears in just a couple of scenes as Peter, the butcher, and leaves an indelible mark behind.