‘The Great Indian Kitchen’ deserves brownie points for its demand for democratization in the household, that should essentially commence from the kitchen. But its overzealous attempts to take quite a few pigeons with a bean, is what leaves it not as great a film as it should have been! 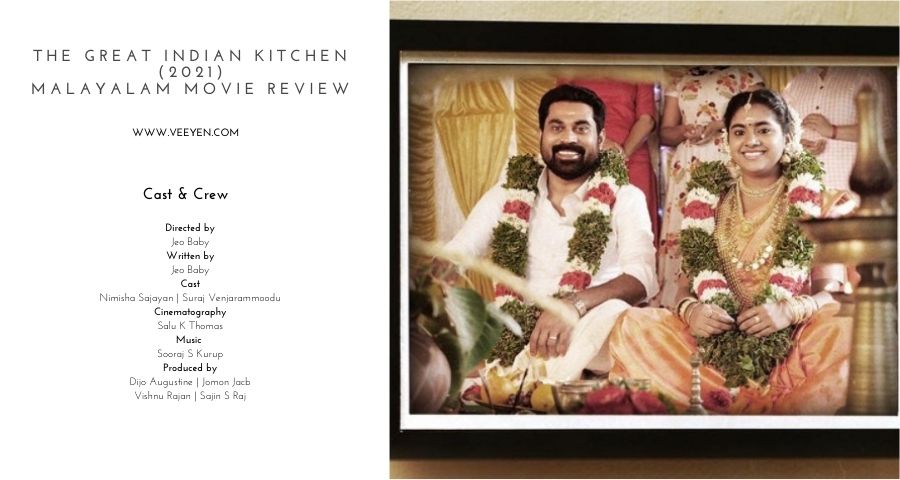 A resolution having finally been made, the female protagonist of Jeo Baby’s ‘The Great Indian Kitchen’, picks up her bag, and goes on a no-return walk, and as the camera pans her stride, you get to see women – many more of her kind, rather – busily lost in varied chores, barely aware of the days that have dawned or the nights that have set in.

The first hour of ‘The Great Indian Kitchen’ is what makes it worth a watch, and the sluggish, and at times slightly distressing attempts of a young bride (Nimisha Sajayan) to be part of a new family that is as far removed from a familiar societal milieu as she could possibly imagine, are deftly captured through her countless interactions in the kitchen, with the veggies to be chopped, the vessels to be scrubbed, the leaking sink and the stinking left-overs in the garbage bucket. 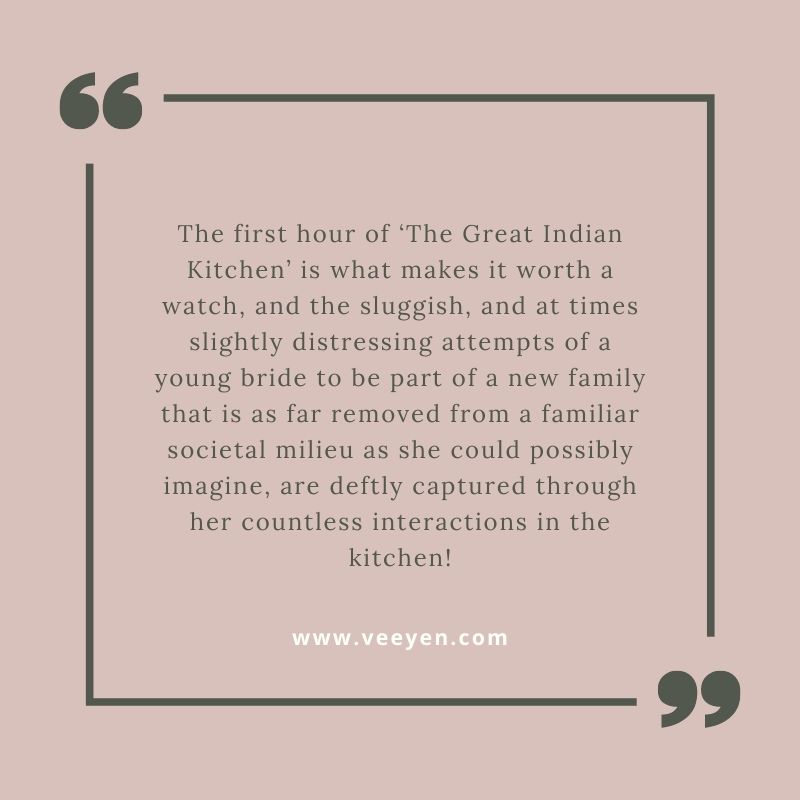 She does all this and more without as much as a second thought, until she takes note of the two men in the family – her husband (Suraj Venjarammoodu) and his dad – who remain oblivious of all the smoke that rises from the kitchen. With the stench of the waste can lurking around her nostrils she lies on the bed at night, letting the husband ceremonially unleash his valour on her.

Baby lays down repetitive shots of tasks in the kitchen along the visual continuum, and the narrative thereby clearly points at the furrow into which the woman’s life has skidded into all on a sudden. Prospects of pursuing a career seem far from sight, and the endless routine of cooking and serving blur out the transitions between days and weeks. 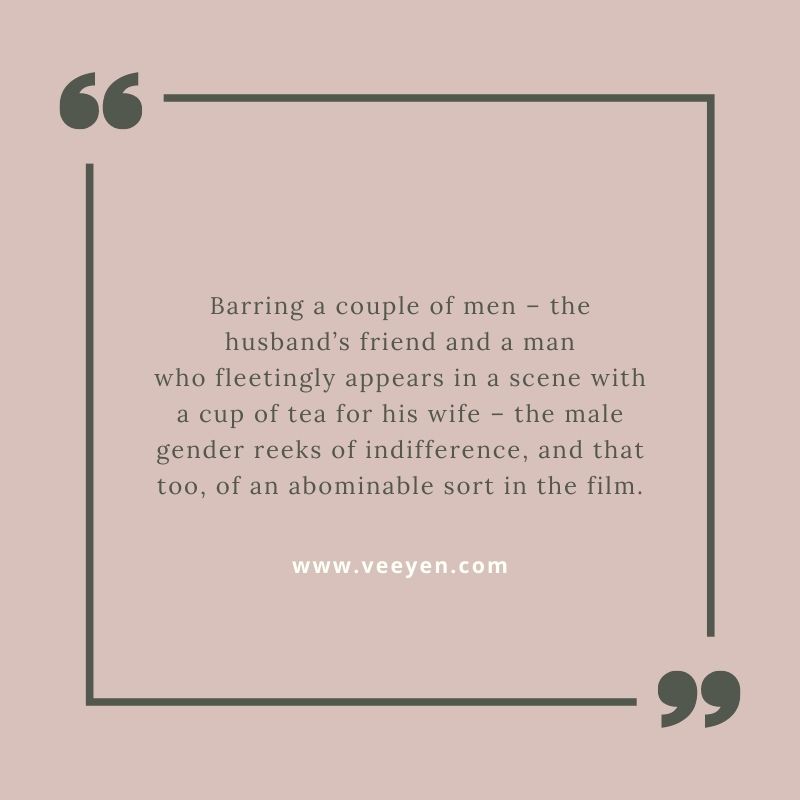 Barring a couple of men – the husband’s friend and a man who fleetingly appears in a scene with a cup of tea for his wife – the male gender reeks of indifference, and that too, of an abominable sort in the film. Take for instance the cousin (Sidharth Siva) who pays a visit, who very conveniently adds himself to the club with a lecture on making the perfect cup of tea, who volunteers to cook the dinner and leaves a horrendous mess.

There are a few other women characters who are woven into the narrative, like the young maid and her daughter who symbolise a pristine sense of independence, the mother-in-law who sheds off her traditional attire in her daughter’s apartment in some far off city but who hasn’t quit chopping the vegetables and the woman relative who is quick to admonish the new bride’s ways.

While Baby does a fantastic job of examining the dilemma that a young girl wedded into a patriarchal family dabbles with, he loses ground when the husband decides to go on a pilgrimage and declares that he would be on a fast. Thereafter, his characters shift to a scenario that is far removed from contemporariness, and the circumstances appear increasingly implausible.

Scenes that seem ripped off from some long bygone era, where a menstruating girl is shut in a room with a food plate thrown in, could very well be utilized to prove a point that the film maker probably has in mind, but this vagrant generalization is way too off the reality mark in the current times, to be taken any seriously. 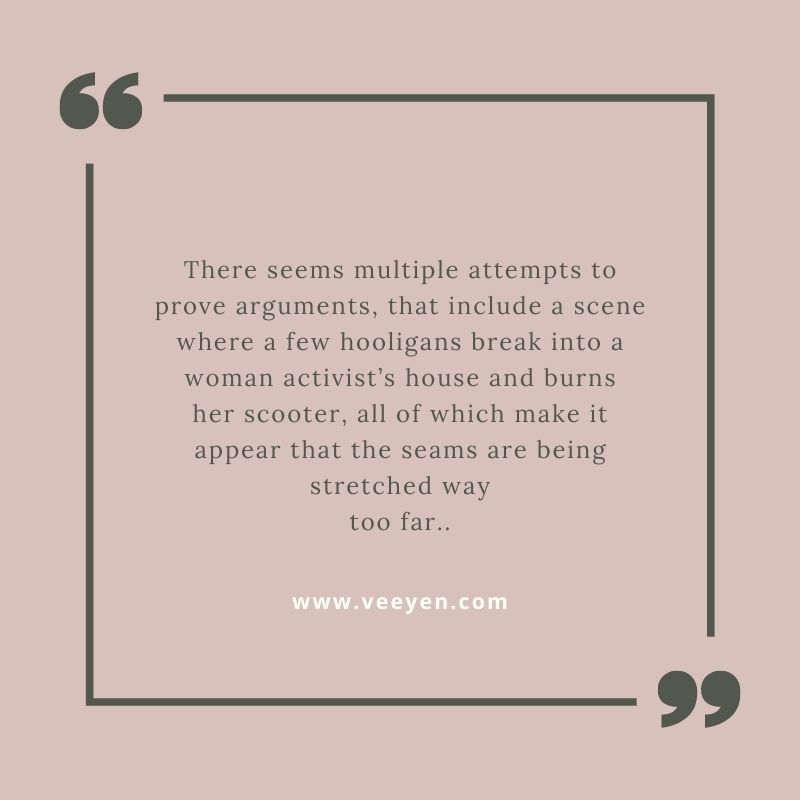 Thereon, there seems multiple attempts to prove arguments, that include a scene where a few hooligans break into a woman activist’s house and burn her scooter, all of which make it appear that the seams are being stretched way too far. And there is the climactic sequence that strikes you as a reconciliation for the several botched-up sequences that immediately precede it.

The believability that Nimisha renders to the character that she plays, is what makes ‘The Great Indian Kitchen’ interesting, in many ways. She is way too good even in the sequences where credibility takes the backseat, and is ably supported with admirable feats from Suraj Venjarammoodu and a host of other actors.

‘The Great Indian Kitchen’ deserves brownie points for its demand for democratization in the household, that should essentially commence from the kitchen. But its overzealous attempts to take quite a few pigeons with a bean, is what leaves it not as great a film as it should have been!