Conor and Jock in Peter Foott’s ‘The Young Offenders’ have to be the most adorable dingbats that I have seen on screen in years. Set in the city of Cork, the film talks of these daft teens who have just turned fifteen, who are the bestest of friends, who have the weirdest of dreams, who claim to have an identity as distinct as possible from the other, and yet who share the same pair of briefs. 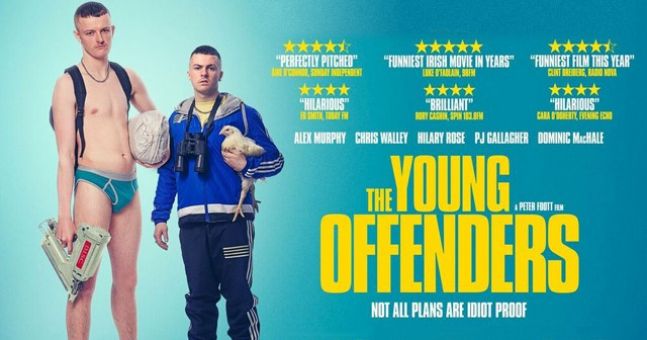 It is madcap fun that Foott unleashes on us, and as the two embark on a road trip to the coast with a sinister scheme all neatly planned out, you know there is no stopping them. Things go awry without doubt, and Foott throws in a psychotic man with a disability and armed with a nail gun into an insane climax, if not having a constantly yapping fishmonger mom and a weirdly vindictive and determined Sergeant around weren’t enough.

The lines are priceless. Assigned with the task of killing and plucking a chicken, the boys find themselves on shaky ground. “When you live in the city, you don’t see many animals die,” Conor explains. “They’re all dead when they get there.” Or there is the rumination that Conor offers at another point, when he after a bit of a deliberation, he sets out on the journey with Jock. “There are two things you need for an adventure: a treasure map, and someone dumb enough to go with ya!”

Alex Murphy as Conor MacSweeney and Chris Walley as Jock Murphy have been perfectly cast, and together, they are nothing less than brilliant. Equally impressive is the way the film glazes over its weighty parts, never letting itself to be bogged down by the load. ‘The Young Offenders’ is a delightful watch, a film that straightaway scores an ace.