‘Anjaam Pathira’ elevates itself much higher than the usual plains occupied by a standard murder mystery, and is a thrilling ride that is gripping to the core. With a whopper winner as this hitting the screens as January just about gets under way, looks like we might have a superb film year coming up this time around!

It’s not every year that you have barely gotten over your New Year celebs, and you are gifted with a sharp film that has got almost every bit of its play right. Midhun Manuel Thomas’ ‘Anjaam Pathira’ is an incredibly nuanced crime thriller, that increasingly gains momentum with every passing minute, rendering it a thriller that quite matches its ambitions.

At the crux of the tale, we have Anwar (Kunchacko Boban), a psychologist pursuing his doctorate degree and an aspiring criminologist, with an uncanny knack of identifying the loose ends left behind at a crime scene. When the police officers of the city start getting murdered one after the other, it doesn’t take long for Anwar to realize that a clever brain with a masterly plan of serial knockoffs is behind the mayhem that ensues.

This is without doubt a film that envelopes you, right from the opening scene where you get to see Anwar paying a visit to a serial killer (Indrans) who has been nicknamed the Ripper, who is about to be hanged, at the jail. The man, aged sixty four, demands a milkshake, and starts talking to Anwar of the inexplicable ecstasy that the sound of crushing a skull drowns him in. 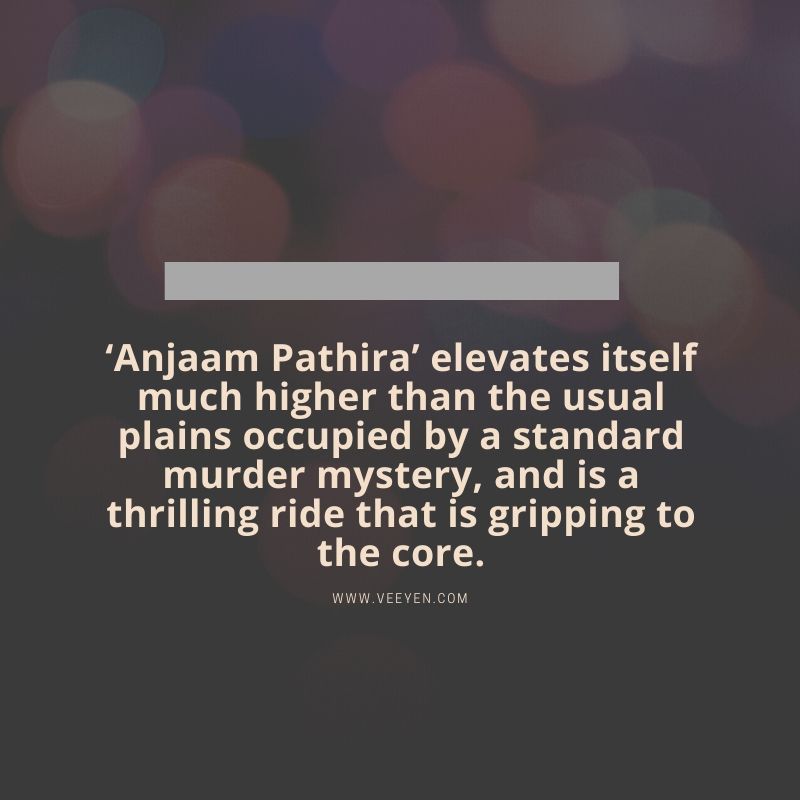 ‘Anjaam Pathira’  zooms ahead like an express train in full throttle, never for a moment letting you settle down or comfortably unwind. Instead, it steadily throws in one chill after the other, as corpses lie strewn around, with eyes scooped out, with zilch clues left behind and the ruthless murderer nowhere in sight.

This is a crackerjack mystery that Midhun Manuel Thomas unravels, and it also has to be without doubt, the sharpest and crispest script that he has penned till date. This time around, he takes no chances, and comes up with a real sucker punch of an ending, that ensures that ‘Anjaam Pathira’ emerges as the first blockbuster of the year.

Linking it up with some real tales that we might have heard of, ‘Anjaam Pathira’ is never short on the thrilling moments that a film as this should mandatorily have. The revelations that interspersedly arrive are well timed, the purposeful detours that are made contributory and the motivation for the crime, well justified.

This is a clear-cut exercise in suspense, and what makes Midhun Manuel Thomas’ film different from the usual flicks in the genre is that it remains quick and agile from start to finish. Even in instances where you do get to guess the rest of it, and where it doesn’t break new ground, it remains a tense and taut thriller that goes down household trails with immense style and skilfulness. 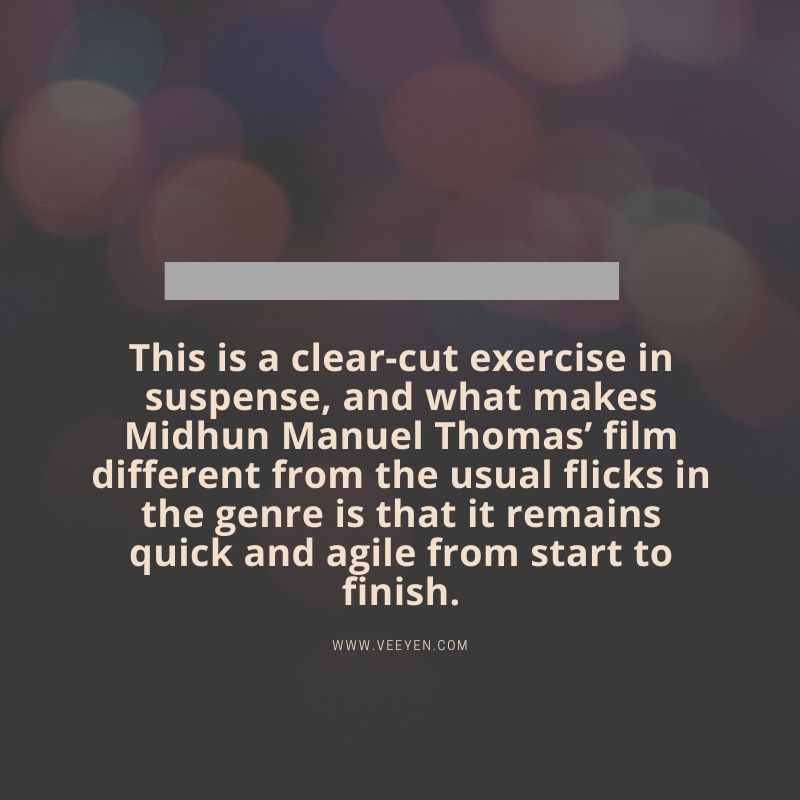 There are real engaging performances from the leading past, and with an in-form Kunchacko Boban leading the pack, there are also self-assured feats from actors as Jinu Joseph, Unnimaya Prasad, Sharafudeen, Sreenath Bhasi, Indrans, Remya Nambeeshan, Divya Gopinath, Harikirshnan, Arun and Abhiram Pothuval. The cinematography by Shyju Khalid is top-notch and the background score by Sushin Shyam , especially in the climatic sequence is nothing short of exceptional.

‘Anjaam Pathira’ elevates itself much higher than the usual plains occupied by a standard murder mystery, and is a thrilling ride that is gripping to the core. With a whopper winner as this hitting the screens as January just about gets under way, looks like we might have a superb film year coming up this time around!