‘Argentina Fans Kattoorkadavu’ dips its fingers in two bowls – of football and romance – and does justice to neither. Though it does elicit a few laughs here and there, there are very few other bright lights shining on this film that claims to be all about sport and love.

Mehar (Aishwarya Lekshmi) is the one person you take back home along with you after a late night show of Mithun Manuel Thomas’ ‘Argentina Fans Kattoorkadavu’, while the rest of the film and its characters choose to wander away on their own. Meandering along a lot of paths, none of which leading particularly anywhere, ‘Argentina Fans Kattoorkadavu’ isn’t exactly a glorious tribute to the world’s favourite sport or its fans.

‘Argentina Fans Kattoorkadavu’ is also about Vipinan (Kalidas Jayaram) who is a hardcore fan of the Argentina team. Having grown up with Mehar, it takes a while for Vipinan to discover that his heart beats solely for her, and though Mehar does acknowledge it, she is also quick to dismiss his appeals as irrational and unfeasible, given that they come from diverse family backgrounds, and religions.

Spanning across a few decades, ‘Argentina Fans Kattoorkadavu’ jumps across its major milestones that are dropped along the Football World Cup years. Quite a lot happens over these football finales, and Mehar who has forever remained a Brazil fan, does the ultimate walkover and joins the Argentina fans league, for reasons unknown and unspecified.

With a running time of about two hours and twenty minutes, ‘Argentina Fans Kattoorkadavu’ is less about football, and more about its fans in the state, and how they battle it out with each other to lay claim on the trees where they could tie up their flex designs. Which is why, there is a celebration of sorts, when Vipinan and his team put up a gigantic Messi hoarding in 2018, that reminds one of Bahubali, easily putting their competitors to shade, establishing once and for all, that they are the unsurpassable lot in Kattorkadavu. 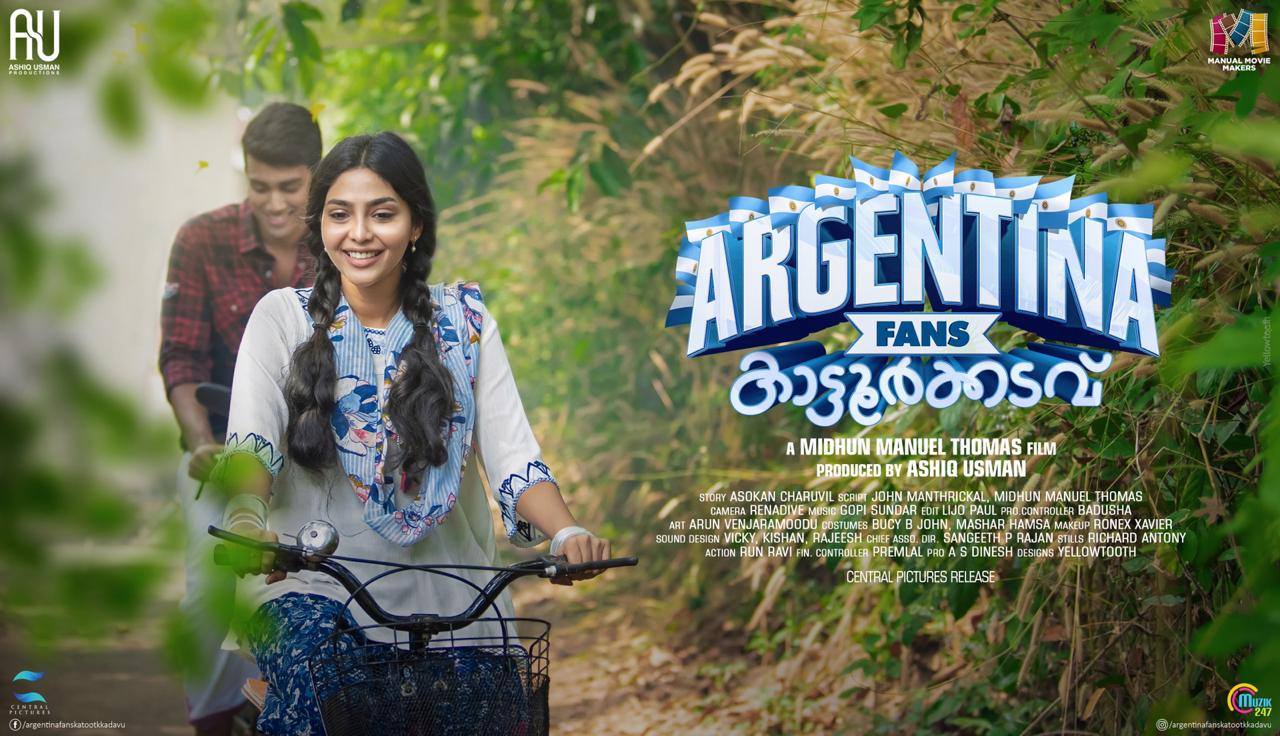 Perhaps no questions should be asked as to how outrageous all this looks and sounds, but what makes the film itself inadequate is the fact that it simply fails to pump in the energy that is so required for an adulation of this sort. Granted that there is a lot of talk on the football frenzy that floods the state once in every four years, but little that actually transports all that passion on to the screen.

Which is why, Mehar comes as a charming surprise in the film, and establishes herself in no time as a distinct female presence in an all-too-male crowd. Settling herself comfortably amidst a throng of male football fans, Mehar dignifiedly maintains her own ground, comfortably holding the reins of her decisions, and in the climax, of her life.

And to add to all this melee, there is a lethargic fantasy element thrown in, with none other than Andres Escobar (Austin Dan), the Colombian footballer himself appearing as Vipinan’s confidante.  They engage in conversations that dwell on their much-loved sport, as well as Vipinan’s life, and Escobar apparently is made to express an opinion or two on almost everything in life, that includes Vipinan’s love saga as well.

‘Argentina Fans Kattoorkadavu’ has some brilliant performances, and leading the pack is none other than Aishwarya Lekshmi, who is way too good, in a film that would probably remembered most for her. Kalidas does a decent job as well in a role that is way too underwritten, and there are lots of commendable performances from several young actors as Neeraj, Austin Dan, Aneesh Gopal, Anu K Aniyan, Syam Cargoz, Arjun Ratan, Manikandan Pallipatt, Aroop and Zhinz Shan, just to mention a few.

‘Argentina Fans Kattoorkadavu’ dips its fingers in two bowls – of football and romance – and does justice to neither. Though it does elicit a few laughs here and there, there are very few other bright lights shining on this film that claims to be all about sport and love.