‘Carbon’ is a draining film; a confounding piece of cinema that requires as much an effort from the viewer to make sense of it, as from the film maker himself in its creation.  This certainly isn’t its flaw, and where it tires the spectator out is in its decision to remain obstinately abstract throughout, conjuring up smoke swirls of obscurity and vagueness, and decisively dropping a cue here and there, driving the audience to connect together its disjointed pieces into a rational whole, and compelling them to hunt out the key to the puzzle.

There are these questions that keep hitting the ball around on your dazed mind, as you walk out of a late night show of Venu’s ‘Carbon’ – how much of ambiguity is excessive ambiguity, how much of a mystery is too much mystery and how much of abstractness is abstractness gone overboard? Where does a film maker draw a line, when s/he decides to leave a film open to manifold readings, and on second thoughts should there be a line in the first place?

‘Carbon’ is a draining film; a confounding piece of cinema that requires as much an effort from the viewer to make sense of it, as from the film maker himself in its creation.  This certainly isn’t its flaw, and where it tires the spectator out is in its decision to remain obstinately abstract throughout, conjuring up smoke swirls of obscurity and vagueness, and decisively dropping a cue here and there, driving the audience to connect together its disjointed pieces into a rational whole, and compelling them to hunt out the key to the puzzle.

It’s a treasure that Siby (Fahadh Faasil) hopes to unearth at Thalakkani, somewhere deep in the jungles, where during Tipu Sultan’s reign, a consignment that comprised of several pot loads of gold had ended up in the dust during transit, with no news heard of the men who were entrusted with the transfer of the fortune. Several buoyant treasure hunters had reportedly ventured to Thalakkani thereafter, where rumouredly the headless warriors await, and very few of them had made it back alive, and hardly anyone with their sanity intact.

Siby is a man who, much to the dismay of his parents, has refused to grow up. A quick fortune is what the young man has in mind, and one business deal after the other ends up down the drain, even as he self-assuredly dabbles with multiple ideas that would render him rich, ranging from selling off emeralds to smuggling in silver owls, importing bicycles from China to exploring the potentials of putting up an elephant for sale.

In a surrealist episode that has a dream like tenor to it, Siby heads over to an old mansion that has very obviously seen better days, with the intention of taking a look at the household’s tusker that has been put up for sale. The woman who greets him (Praveena) has an air of authority around her that she casually brandishes around with her hefty gait, and a sharp gaze that she darts straight off those eyes, one of  which looks red and sullen as if some pomegranate juice has been splattered over half of it. The all eager mahout (Soubin Shahir) with a mumble mouth is all praise for the animal and as Siby leaves, swiftly follows him out with a startling revelation that leaves the optimistic broker in tatters and running for his life.

This is the scene where the film proclaims that not everything is as we see and judge it to be. This is also where you wonder what sort of a man Siby is, and if in his struggle to survive, he has ventured beyond the bounds of reason. Not much later, he walks by a bank with a backpack latching on to his shoulders, and catches sight of himself in the bank, all involved in a heist and making away with the loot. This is also the point where you lose your trust in him, and the things that he sees; where a mist of indistinctness gradually seeps in, where it turns impossible both for him and us, to delineate the real from the illusory.

Sameera (Mamta Mohandas) is a self-proclaimed jungle junkie who volunteers to join Siby on his jaunt to Thalakkani. She strikes you more as a quaint metaphor than a character and is also the one who lights a candle, albeit briefly, and dispels the shadows that had set in. In a fleeting, and yet very significant moment, she talks of Coelho’s Alchemist, and when Siby confesses of not having read it, explains to him as to how the treasure lay at the beginning of the man’s journey and how he comes to realize it only after having traversed the entire world, looking around for it.

Cinema has without doubt, moved beyond a point where every nitty gritty bit of detail has to be visually explained  and there are several film makers who revel in leaving loose ends around, and successfully so. It hasn’t been long before Venu himself smacked us on the face with a whopper of a climax in his film ‘Munnariyippu’, that had us animatedly pushing in the final piece. But in ‘Carbon’ he lets the material spin round and round along with its persistent protagonist, its textures arbitrarily overflowing and overlapping and drawing us deeper and deeper into a cesspool of no return.

In all probability it’s not a prosaic answer that ‘Carbon’ intends to point at; rather it’s an opportunity to scrutinize the possibilities that it has concealed within. But the kind of payoff that it offers for these gargantuan efforts is dismally small and through extensively elongated sequences, eventually leads to an ending or a non-ending, depending on how caught up you had been with the turn of events. The flash of gold at the end of it all struck me as a deceptive gimmick as had the many sequences that had preceded it, leaving you aghast and dazed and irresolute if it’s yet another of those many fallacies that we have been through and unsure as to how gravely it needs to be considered. 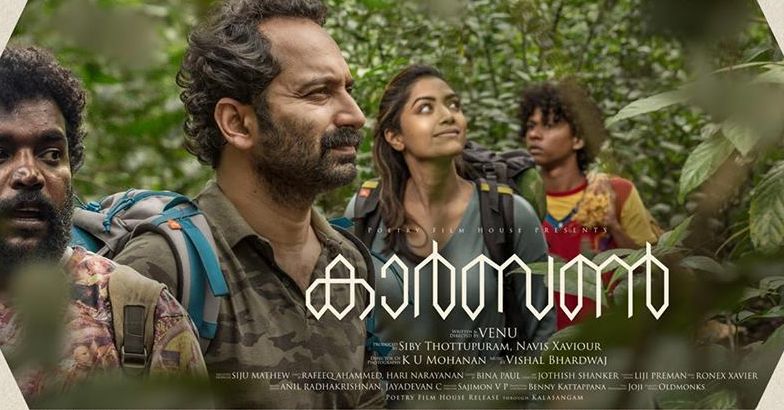 ‘Carbon’ is a film that polarizes its viewers; you might either belong to the ones that take a keen interest in attributing an obligatory implication to every turn that it decides to make or to the other group that is dissuaded by the apparent lack of incentive beneath such serious perusal of its matter. Confessedly I belong to the latter cluster that after an initial splutter of curiosity finds it strenuous to dig into the meandering narrative, especially with no outstanding rewards in sight.

Looking back, perhaps this analysis should have commenced and ended with the one man who makes this film worth a watch. That Fahadh Faasil is an actor who could jolt us, in a very endearing manner through his chillingly real performances, is a fact that has been established sans doubt, and yet in ‘Carbon’ the man affirms that there is no end to the suppleness that he is capable of. Here he pulls it off in grand style; the positive actor looming large over the irresolute material, dispelling a shower of subtleties that render his act a terrifically meticulous feat. There are also sparkling performances from Mamta Mohandas, Manikandan Achari, Chethan and Kochu Preman, not forgetting to mention the brief appearances by actors as Nedumudi Venu, Soubin Shahir, Praveena, Vijayaraghavan, Sharafudeen and Dileesh Pothan.

‘Carbon’ also has multiple instances of the best cinematography that one has seen in recent times, and there are even moments when the noticeably demanding camerawork adds to the film’s inscrutability, never letting out anything more than what we ought to know. K U Mohanan is the man who lends a visual charm to the puzzle, and the mystic feel that ‘Carbon’ has is courtesy its brilliant cinematographer.

‘Carbon’ is a long drawn out account of a hallucinatory trip of self discovery of a man, in which there is hardly any progression with regard to its central theme. With too many loose ends flying all around  in the wind, like that of a rag torn to shreds and hung on a line, it requires a whole lot of stitching up to appear coherent, or even intriguing for that matter.