‘Haseen Dilruba’ leaves you a bit bored, and least bothered. It tries to be steamy and yet sinks like a rock, and could very well be remembered as a botched-up thriller that had got both its romance and mystery wrong. 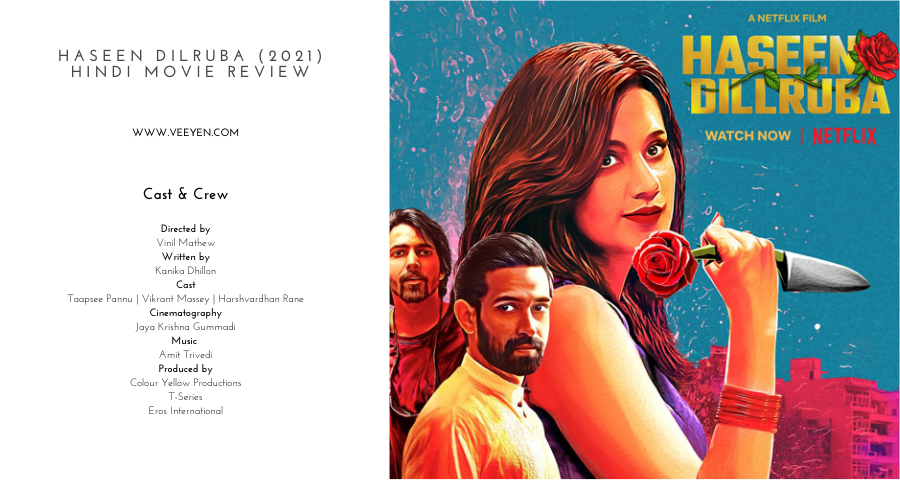 Rani Kashyap in Vinil Mathew’s ‘Haseen Dilruba’ is no Catherine Tramell and let’s face it Taapsee Pannu is no Sharon Stone either. On second thoughts, it would be unjust to assume her to be, but to expect Mathew’s romantic mystery to be a psychoanalytic thriller from its intriguing poster designs should be fair enough.

‘Haseen Dilruba’ is far from fascinating, however, and chronicles the life of a woman, Rani Kashyap (Taapsee Pannu), after her husband Rishabh Saxena (Vikrant Massey) loses his life in a kitchen gas cylinder blast. Inspector Kishore Rawat (Aditya Srivastava) believes there is more to the accident than what meets the eye, and he summons Rani to the police station determined to get her framed for murder. 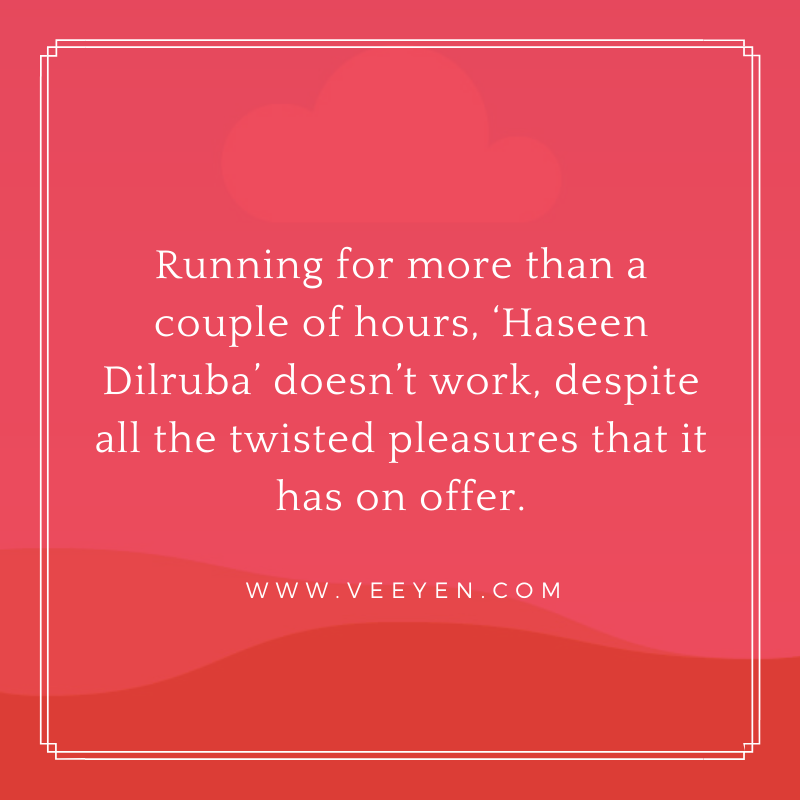 Running for more than a couple of hours, ‘Haseen Dilruba’ doesn’t work, despite all the twisted pleasures that it has on offer. And the problem is that it’s just not Rishabh who’s dead; equally dead are the rest of the characters in the script, and they simply do not have enough life in them to transform this flick into an interesting intellectual exercise of any sort.

Rani has you in double or triple minds, as you please, and her transformation from a glamorous Delhite to a bored bride in Jwalapur, is simply not conclusive enough. What is indeed convincing is the momentary fling that she has with Neil Tripathi (Harshvardhan Rane), but the plot development thereafter renders ‘Haseen Dilruba’ totally flat. 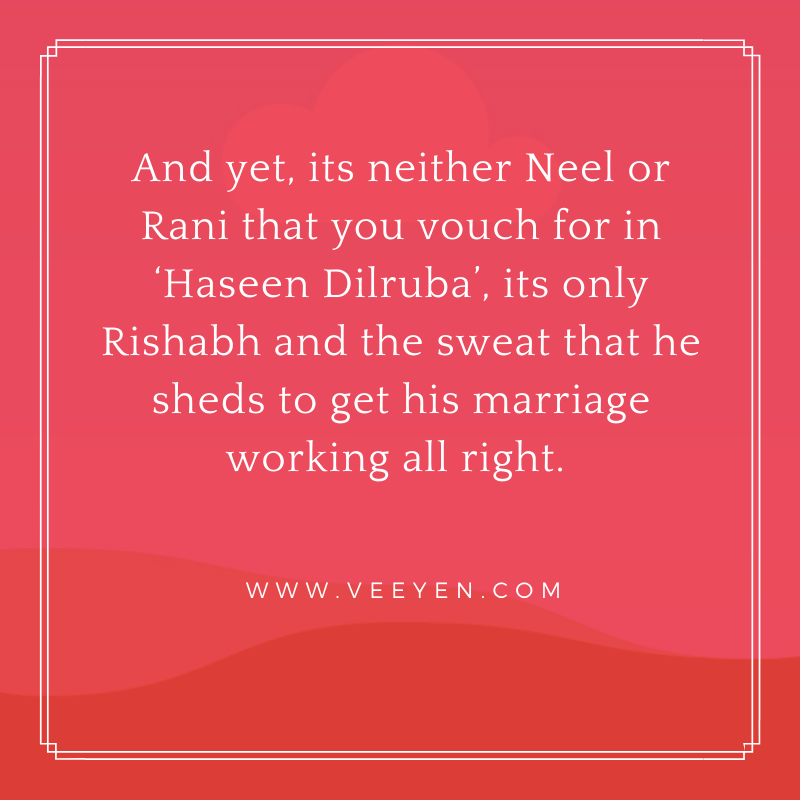 And yet, its neither Neel or Rani that you vouch for in ‘Haseen Dilruba’, its only Rishabh and the sweat that he sheds to get his marriage working all right. The best scenes in the film belong to him, whether it be the torrent that leaves his Suhag Raat dreams drenched or his shutting his eyes a bit too tight in self-loathing and shame, realizing that his first ever sexual exploration on bed had ended a bit too faster than he had anticipated.

Despite the opening blast and the severed arm with the tattoo on it that sets things rolling, nothing much eventually follows in ‘Haseen Dilruba’, except a series of interrogation sessions between Rani and the cops, that keep rebounding to the same point. Kanika Dhillon’s script doesn’t have it in it to raise your heartbeats, and you are left with a very basic tale of a frustrated housewife who falls for hunk and immediately regrets it.

There is the stupefyingly lacklustre final revelation that is brought about through a work of crime fiction that Rani dotes on, and you are left aghast at how cheesy the whole thing sounds. This is an ill-conceived climax going by any romantic yardstick and it drowns the few odd well-conceived moments in a deluge of awkwardness. 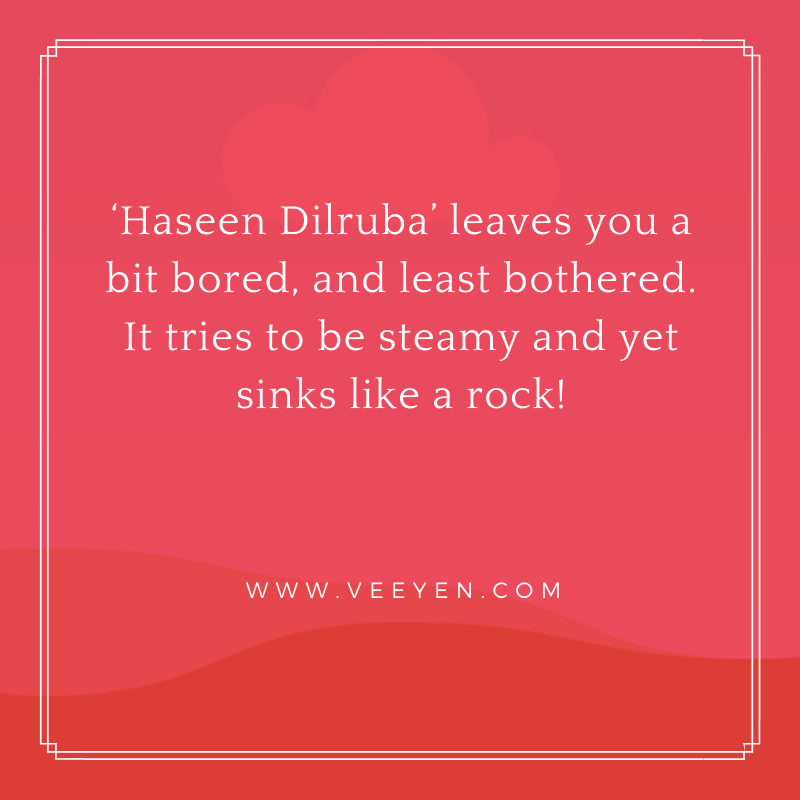 Vikrant Massey is the sole individual around who holds his head high in this puddle, and he is so damn impressive with a performance that is out-and-out credible. He is also the chief reason why you reach out to Rishabh Saxena, and there are times when he even manages to distract you from the potholes in the script, with that adorable feat of his. Taapsee is good, but the writing does let her down, and Harshvardhan looks every bit the beefcake that he is supposed to be.

‘Haseen Dilruba’ leaves you a bit bored, and least bothered. It tries to be steamy and yet sinks like a rock, and could very well be remembered as a botched-up thriller that had got both its romance and mystery wrong.