Lijo Jose Pellissery’s ‘Jallikkattu’ is a searing reminder of how primal we still remain and how readily the facades of culture and civilization topple down all around us, when the primordial instincts within us, run riot. Uncompromising to the core and often beguiling the viewer, this is a fascinating film set on an astonishing momentum that reaffirms the director’s reputation as a fabulous film maker who ruthlessly shreds up and throws genre conventionalities to the winds. 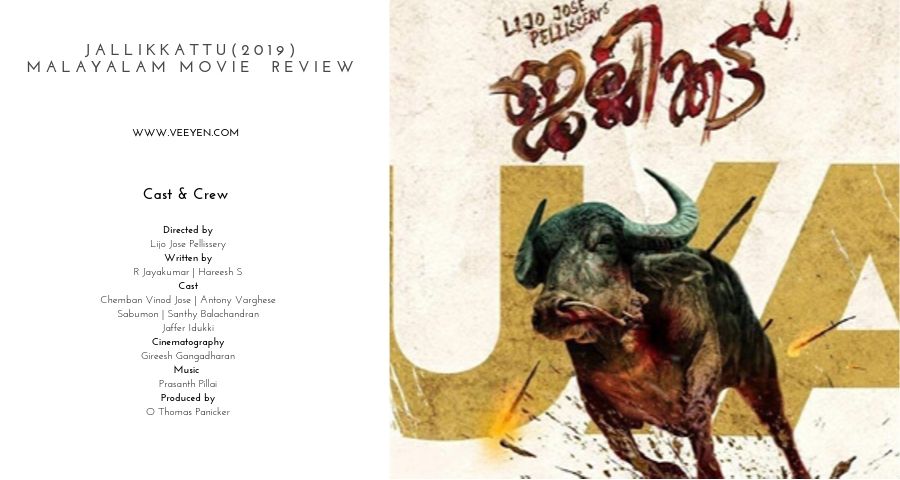 A fleeting moment of darkness and silence succeeds the pivotal instant in Lijo Jose Pesllissery’s ‘Jallikkattu’ – that flash of a second when the reins of authority that man had held twisted between his burly fingers is wildly snatched away. It unleashes a maniacal race where man and nature indulge in a no holds barred battle, that ironically forces a return of the former to the roots, to where it had all once begun.

The brash ticking away of an aged wall clock coincides with the blinking open of eyelids, and as the time rounds away anti clockwise, it seems a prelude to a pursuit that would lead us on to the backdoors of life; one which would coerce us to throw them open to reveal a dark world that we never knew existed within us. It’s a bloody pursuit that we set out on, and with the heavy exhalations and inhalations that down every other noticeable sound around, this appears a frantic quest that would shove us back and forth along the timeline, where we would at once be who we are, who we were and who we had always been. 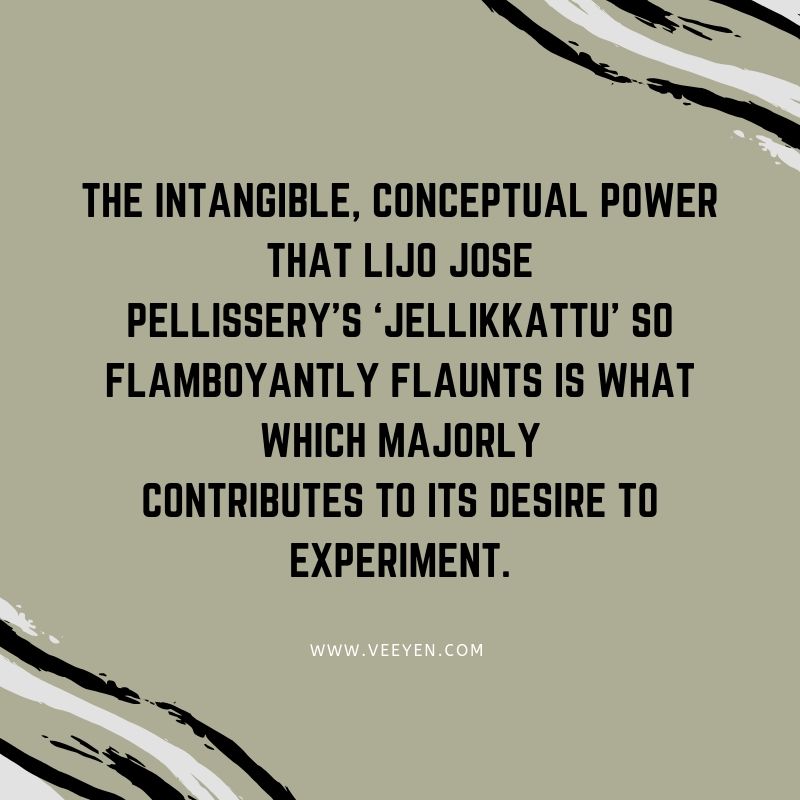 The intangible, conceptual power that Lijo Jose Pellissery’s ‘Jellikkattu’ so flamboyantly flaunts is what which majorly contributes to its desire to experiment. This is also what renders it much more than a startling spectacle of mounting tension and action and lets it materialize as a subversive commentary on the social and political scenario of the state.

There is a harsh beauty in the landscape that Lijo sets his piece on, and the opening scene lets the hesitant blue of the morning sky sink in, as the camera idly waits for the streaks of crimson to stretch across the discernible contours of a hill.  What follows is a melange of sharp cut shots that are delectably thrown in across a green plain that looks overgrown with pepper and cardamom, as a knife drives itself into the bark of a rubber tree persuading a milk stream to follow its trace, as a cleaver has a go at a slab of fat meat that is sloppily laid across the wooden cut-top, as a man delivers a smarting slap on his wife’s face for the breakfast that she has cooked and which he simply abhors.

In the tiny hilly settlement that has dimly lit yellow bulbs shining on the walls of shacks with low seams, the men appear prominent. Drenched in profanity, their coarse sounds and crude laughter rule the air, as they buy and sell, roar and revel, coax and curse, slay and stray away. Lost in the clamour that the men folk rake up, the women mostly remain cloistered behind the kitchen doors, cooking or indulging in an odd moment of gossip, or at the most declaring a word of dissent that mysteriously goes missing even before it is uttered.

The sub plots that are so ingeniously woven into the tale concern an assortment of themes. There is Antony (Antony Varghese) who has had more than an axe to grind with Kuttachan (Sabumon) or Paulachan, the environmentalist who sees red when the buffalo wreaks havoc on his crops. The man who earns himself a cock head-gear (Jaffer Idukki) on account of visiting a woman neighbour to arrange some chicken curry or his daughter who elopes and returns in the course of a night run into each other in their living room. There is Sophy (Santhy Balachandran) as well, who has still not been exonerated by the village women for a frisky affair that she had allegedly had with the physical education instructor in school, and who, after being forcefully kissed by Antony despite her vehement protests, remind him of bringing back the best piece of meat, once the animal has been captured.

It doesn’t take long before Pellissery flags off a lunatic chase, as a brawny buffalo that has been brought in by the butcher Varkey (Chemban Vinod Jose) to be slaughtered, kicks off its ropes and madly stomps away into the shadows of the night. The village is up in no time, as news of the dangerous animal having fled spreads along the night breeze, and the men start gathering around, with torches ablaze and determined to capture it before it’s too late. 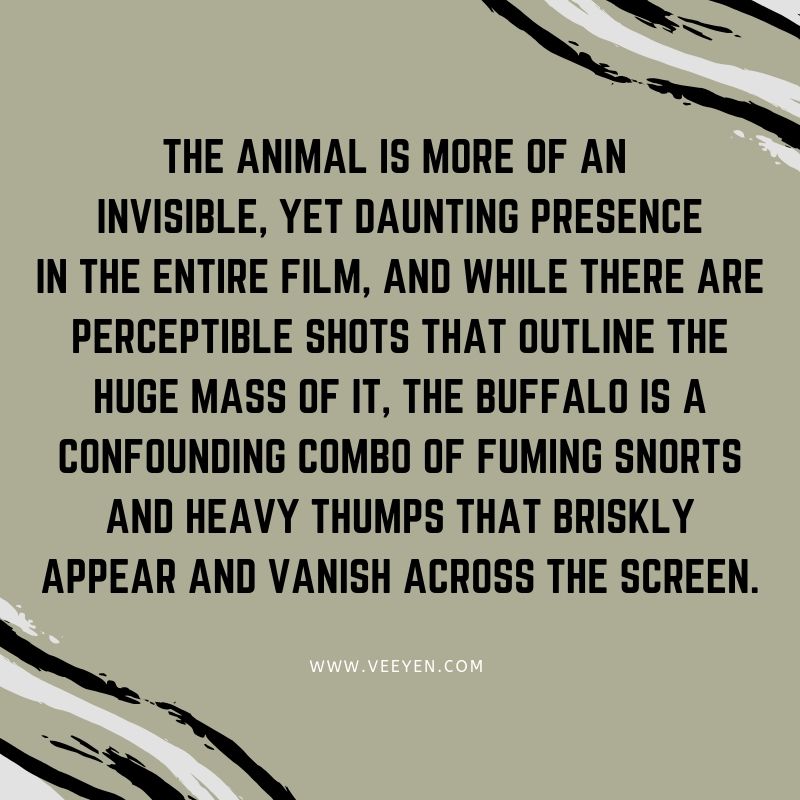 The animal is more of an invisible, yet daunting presence in the entire film, and while there are perceptible shots that outline the huge mass of it, the buffalo is a confounding combo of fuming snorts and heavy thumps that briskly appear and vanish across the screen. This randomness and the flash of greasy, black bulk that appear anywhere and everywhere, crushing anything that crosses its path, throws the aggressive vigilante into a state of terrified turmoil and each time they emerge out of it even more resolute than ever before.

The rope that snaps and sets the animal off and sends an entire bunch of men scampering after it, also shakes and sheds the bindings that fasten the script together. A mindboggling melee follows, where animated conversations are voiced, at times cut short and very often mislaid in the muddle that ensues. Regulations and rules are blown away, and as the night grows older, sweat and blood start dampening the mud.

These are men with earthy flaws that track an animal on the run, and the propulsive energy that drives them forward soon starts showing signs of overwhelming them. With a consuming dread that takes over their very selves, they realize that there is no going back and that they have at once become the hunters and the hunted in this brutal game. 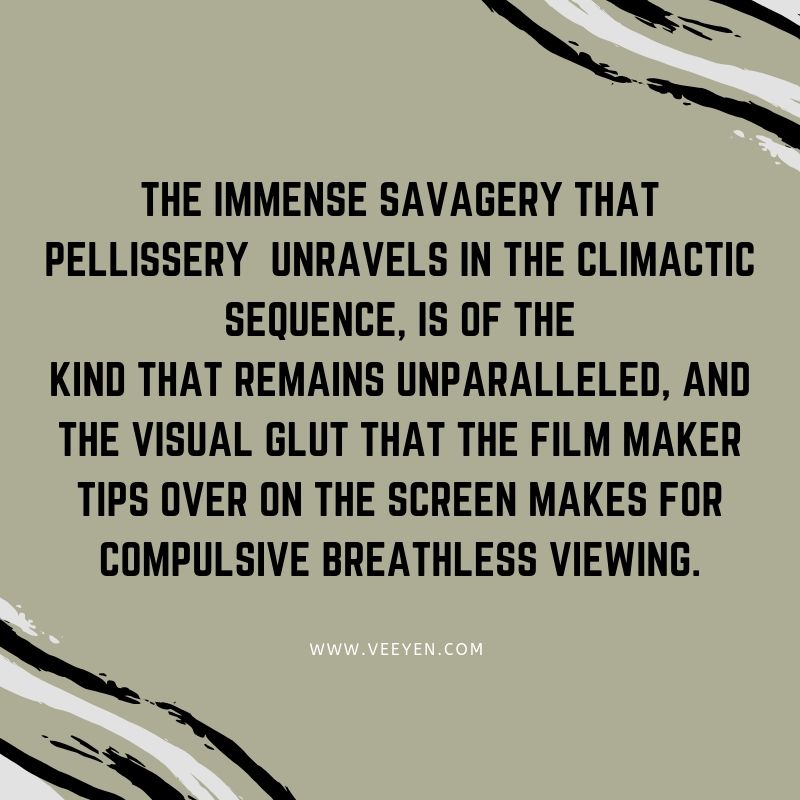 The immense savagery that Pellissery  unravels in the climactic sequence, is of the kind that remains unparalleled, and the visual glut that the film maker tips over on the screen makes for compulsive breathless viewing. As the mounting sights and sounds of a hysteric populace that has lost its very last bit of sanity drown you down, there are quite a few stereotypes that the director stamps firmly down into the mud.

The seemingly fragmented characterization and the half narrated tales match up with the disorientation that eventually overpowers the entire breed of men who in the course of the hunt they have embarked on, comprehend that they can no longer hold back the beasts that have emerged from within. The self-annihilating lunacy that spreads around faster than the fire that burns on the brightly lit torches in their hands, digs deeper within and crawls out in frenzy, transforming them into their primitive selves with the very last bit of sensibility driven out of their heads.

The spectacular crowd dynamics at work here make it almost impossible to single out mind-blowing individual performances and while familiar faces like those of Chemban Vinod Jose, Antony Varghese, Jaffar Idukki, Sabumon, and Santhy Balachandran do stand out, there are several other unknown faces that leave an equally impressive impression. 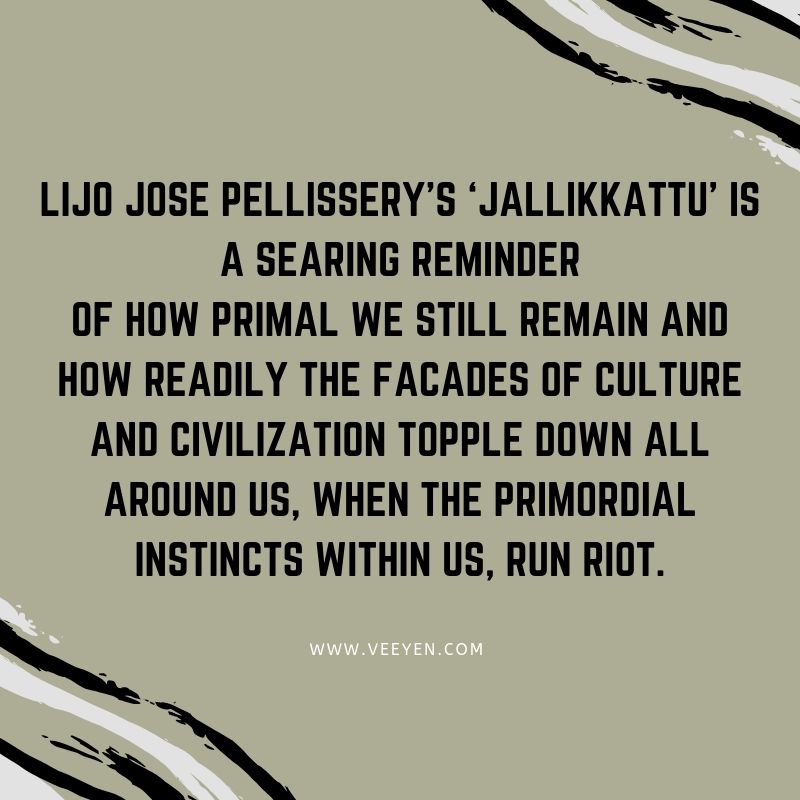 The renowned visual stylist that he is, Pellissery spares absolutely no detail in his account, and is amply aided by some exemplary cinematography by Gireesh Ganagadharan. This is indeed some ferocious work by Gireesh, that rampantly blends together the craziest of tempos and tones with an untamed narrative that is as feral as the animal on the loose. Prasanth Pillai’s uncanny musical score delivers a few gut punches on its own, and adds to the horrific splendour of the piece.

Lijo Jose Pellissery’s ‘Jallikkattu’ is a searing reminder of how primal we still remain and how readily the facades of culture and civilization topple down all around us, when the primordial instincts within us, run riot. Uncompromising to the core and often beguiling the viewer, this is a fascinating film set on an astonishing momentum that reaffirms the director’s reputation as a fabulous film maker who ruthlessly shreds up and throws genre conventionalities to the winds.