‘Johny Johny Yes Appa’  is neither funny nor edgy and leaves you high and dry at the end of its running time. Undermined by emotional incoherence and comic incompetence, this is an unfocussed film that fails to hit its target by a hundred miles.

Marthandan’s ‘Johny Johny Yes Appa’ is a further step down for its leading star Kunchacko Boban, who has had quite a disappointing year this far. It is a lame film that strikes a wrong chord from the word ‘Go’, and yet persistently pulls on for about a couple of hours and thirty minutes , with no release for the viewers in sight.

Johny (Kunchacko Boban) is looked upon by everyone as an epitome of fine manners, while in real he is nothing but a petty thief who has lived lucky all the while. His brothers Peter and Philip (Tini Tom and Sharafudeen), much to their dismay, are often coerced to live up to the high ethical standards that Johny has laid out, and it all seems a pretty picture until a young boy turns up at Johny’s door.

‘Johny Johny Yes Appa’ is not just a story, but rather a manic combo of stories, sub stories and mini stories, all of which have been presented on a platter before you. It does take a while to keep all these methodically arranged up there with their associations intact, and try hard as you may, you might lose out on quite a few.

It’s the comparatively harmless former half that looks better of the two on retrospect, and while it does not hold its ground, it at least has a few scenes that lets some humour flow in. It’s here that the writer Joji Thomas comes into the picture, and despite the script not having the distinct flair that his former film ‘Velimoonga’ so palpably brandished, its relatively a non-toxic first hour though a non-happening one too.

The latter half could very well be made into another film, though I certainly have no intention to put such horrifying ideas into someone else’s head. What I do mean to say is that, the second hour is so remotely away from what we had been made to watch till now, and with a group of fresh characters sashaying in, it all seems so far-fetched to be true.

This certainly doesn’t seem the way Kunchacko Boban should be headed, and after five uneventful releases this year – (six, if you count the cameo in ‘Poomaram’) – perhaps it’s time for the actor to reinvent himself, and majorly so. Perhaps it’s also time for him to scrutinize the scripts further before he gives the final assenting nod, lest his films fall into the familiar clap traps that we have seen them plunge into lately. 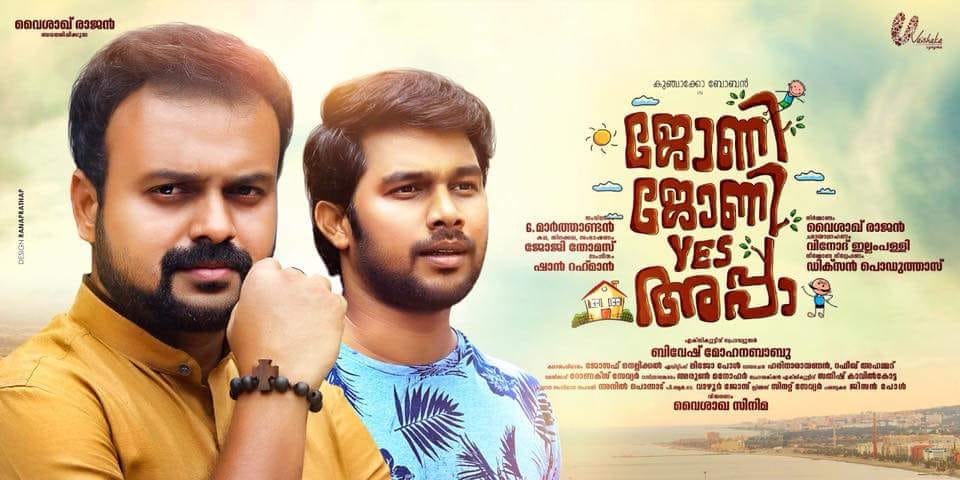 There are also supporting performances from several other actors, among whom only Sharafudeen scores. There is also Sanoop, Tini Tom, Anu Sithara, Mamta Mohandas, Lena, Nedumudi Venu, Abu Salim and several others who join the throng in all eagerness but who hardly get a chance to stamp a mark.

‘Johny Johny Yes Appa’  is neither funny nor edgy and leaves you high and dry at the end of its running time. Undermined by emotional incoherence and comic incompetence, this is an unfocussed film that fails to hit its target by a hundred miles.