‘Sherlock Toms’ is a daft film that is neither alluring nor even remotely interesting. Forget all the incoherence that underlies it, it’s a comedy that glumly fails to conjure up even some simple laughter that would render it memorable or worthwhile. 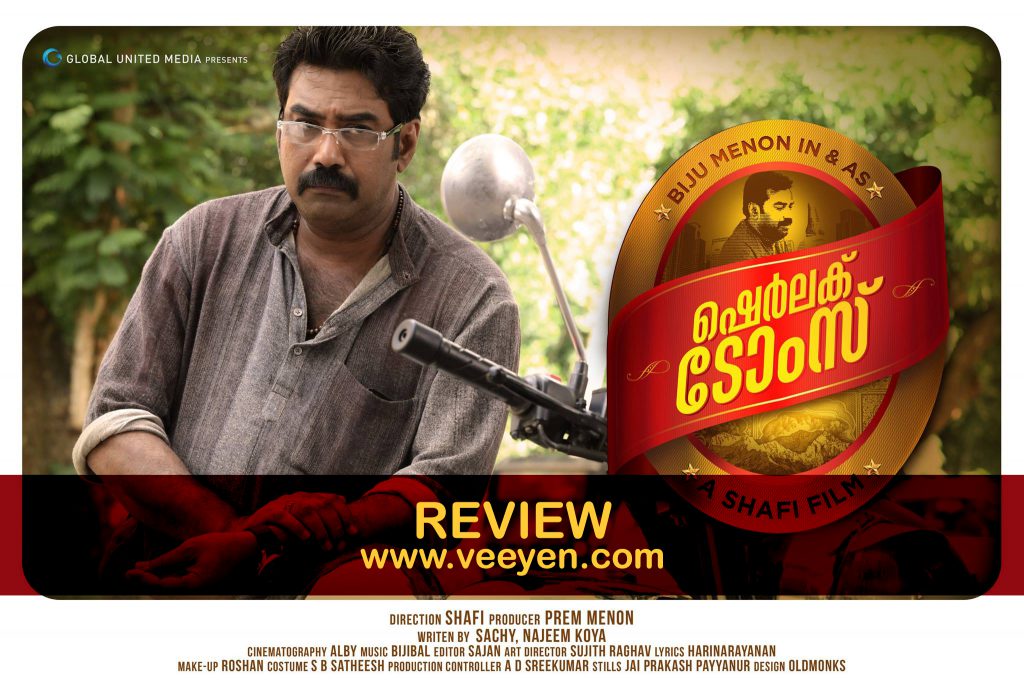 Shafi’s ‘Sherlock Toms’ talks of a boy with a fascination for the Holmes tales; one who unwittingly exposes the clandestine romance of his school teacher (Shajon), leading to the latter’s divorce and expulsion from the school. The boy, Thomas B.L grows up to be an IRS officer (Biju Menon), having taken on the title that his friends and family had bestowed on him – Sherlock Toms.

Having been a self-confessed admirer of the lead actor, I should admit that ‘Sherlock Toms’ hit me, and hit me real hard. This certainly isn’t the kind of film that I would like to watch Biju Menon in, given the fact that he acts in hardly more than a couple of films a year. This is an awful choice, and a horrifically dreadful one at that. 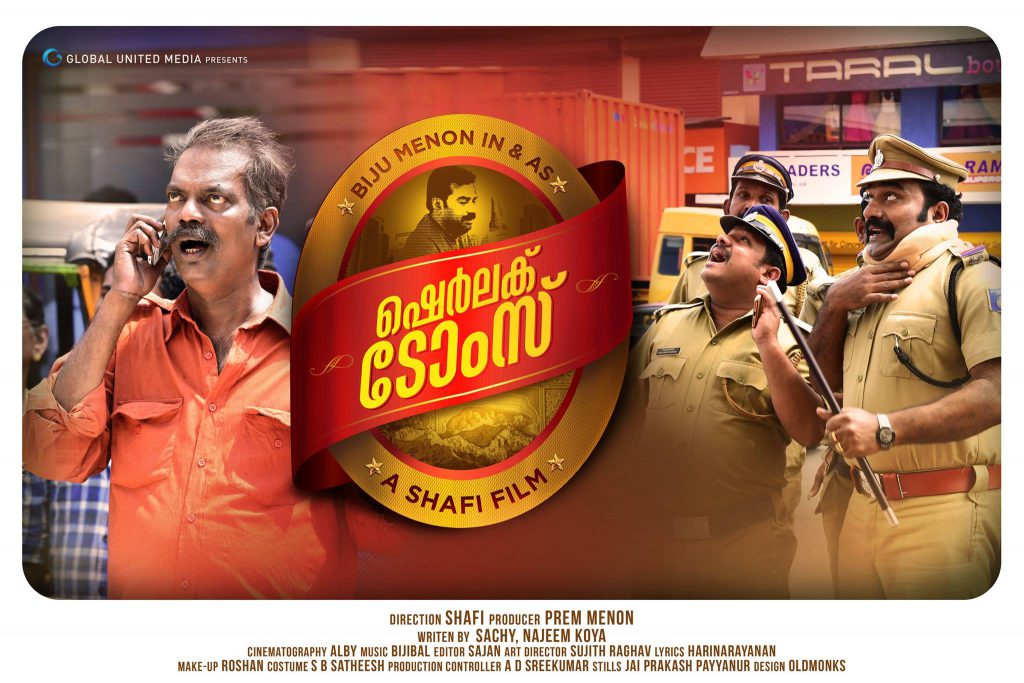 It’s a miserable marriage that Sherlock has landed himself in, and his wife (Srinda) keeps haranguing him on how terrible a husband he actually is. Sherlock finds refuge in being in the company of his friends (Salim Kumar, Noby Marcose and Molly Kannamaly), who have stuck with him through thick and thin.

Najeem Koya’s story takes an abrupt turn, when Sherlock is deputed to the Enforcement Directorate, where he takes on a black money ring that had remained cloaked under seemingly genuine transactions at the Mannanam Chit Funds. A wrong move sees him being suspended from service, wrangling with his wife and climbing atop a hotel and threatening to end his own life. 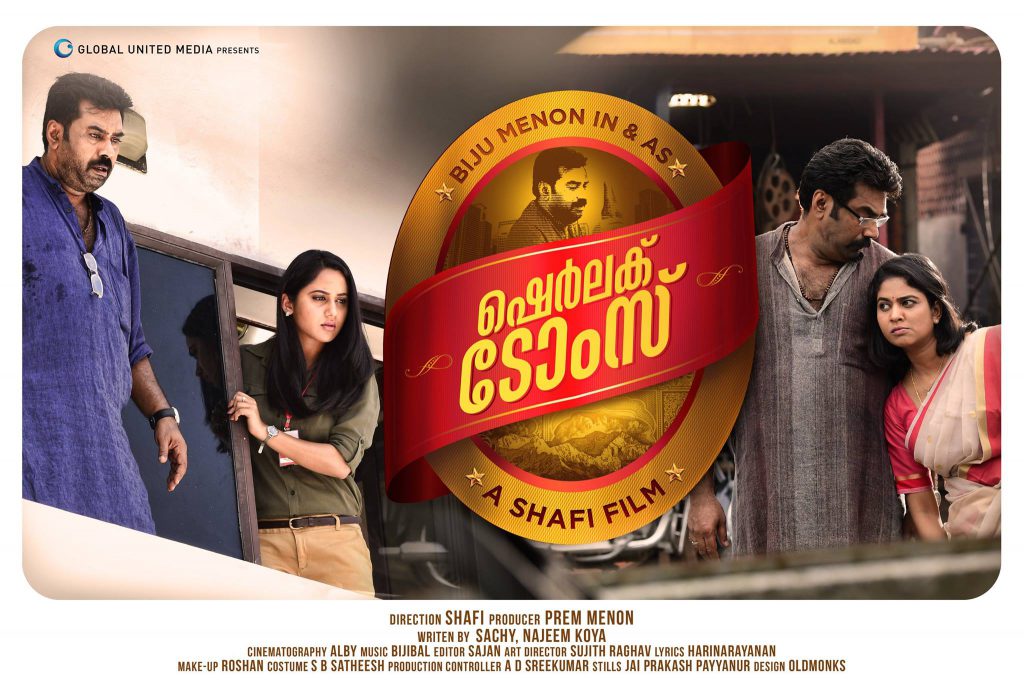 No worries as yet, since I haven’t let out even half the story. The halfway mark shines through, as Holmes walks hither and thither along the balcony, and you head out to grab a coffee to pacify your twitchy head. An hour later, he’s still up there, and your coffee has vanished without a trace, and the last bit of your popcorn has been unearthed and chewed away.

Several other characters walk in, and leading the pack is a Sub Inspector (Kottayam Nazeer) with his nagging neck wedged safely in a collar, and his constable (Hareesh Perumanna) who wouldn’t  even dream of closing his mouth, a media person (Mia George) who digs her pretty nose into anything that comes her way or that is far away, a Fire and Rescue officer (Suresh Krishna) who plans an elaborate plan to abort the suicide attempt and a passerby (Nelson) who gets busy laying a bet with anyone who is willing to predict Sherlock’s action.

There certainly isn’t a harm in lending a humorous twist to the most dreadful of circumstances, and there have been films without doubt, where this paradox has even worked wonders. However, it’s horrendous to see a character in ‘Sherlock Toms’, who is apparently suffering from Alzheimer’s’ being dreadfully used for comic effect. 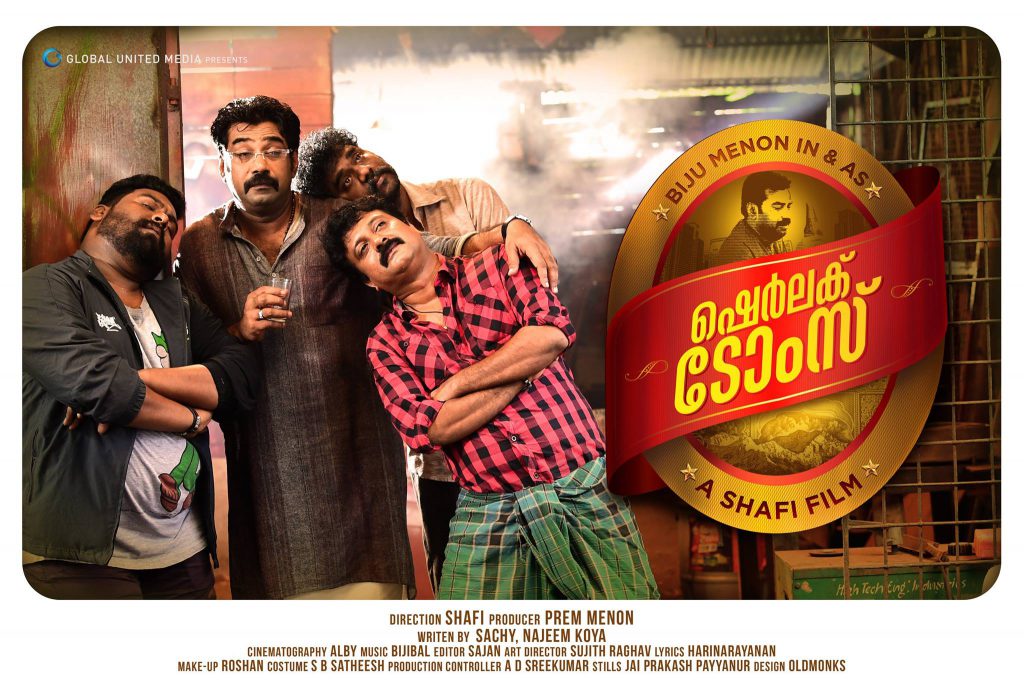 Sherlock’s dad is pictured as an old man, with whom memory had started playing hide and seek years back. Currently a hapless individual who keeps his head buried in a book, who once had been a firebrand comrade, this man bears the brunt of all the tasteless jokes on him, including the ones on his taking a dump in the open courtyard and even being hopeful for a young wife.

A lost looking Biju Menon, Srinda in an uncharacteristically loud avatar, Mia George in a trivial role that should do her no good, and Salim Kumar, Noby and Molly Kannamally shrieking their lungs out – it’s a pretty dismal state of affairs here.  The only silver lining in the cloud is perhaps Hareesh Perumanna who grabs a point here or there for his witty ripostes.

‘Sherlock Toms’ is a daft film that is neither alluring nor even remotely interesting. Forget all the incoherence that underlies it, it’s a comedy that glumly fails to conjure up even some simple laughter that would render it memorable or worthwhile.