It gets increasingly difficult with every passing year to get the tropes of a supernatural horror flick right. Debutante director Jofin T Chacko, must for sure have known what he was getting himself into, and his film ‘The Priest’ strains to achieve what many of his predecessors had set out to. But Jofin’s ambitious film never really springs to life, and there are quite a few reasons why it doesn’t. 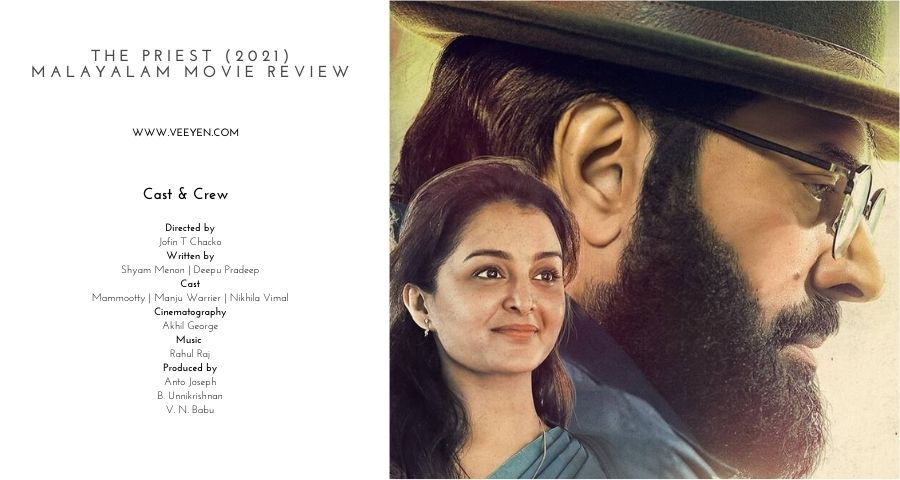 It gets increasingly difficult with every passing year to get the tropes of a supernatural horror flick right. Debutante director Jofin T Chacko, must for sure have known what he was getting himself into, and his film ‘The Priest’ strains to achieve what many of his predecessors had set out to. But Jofin’s ambitious film never really springs to life, and there are quite a few reasons why it doesn’t.

Fr. Carmen Benedict (Mammootty),  is approached by a young girl Diya (Saniya Iyappan) to investigate the mysterious suicides that have occurred at the affluent Alatt family. Reason? The priest has quite a reputation of having solved many mysteries in the past, and is much trusted even by the state police force in his ability to investigate crimes. He soon gets down to tracking the case, and in the process comes across an odd, young orphan girl named Ameya Gabriel at a crime scene (Monica) who instantly catches his attention. 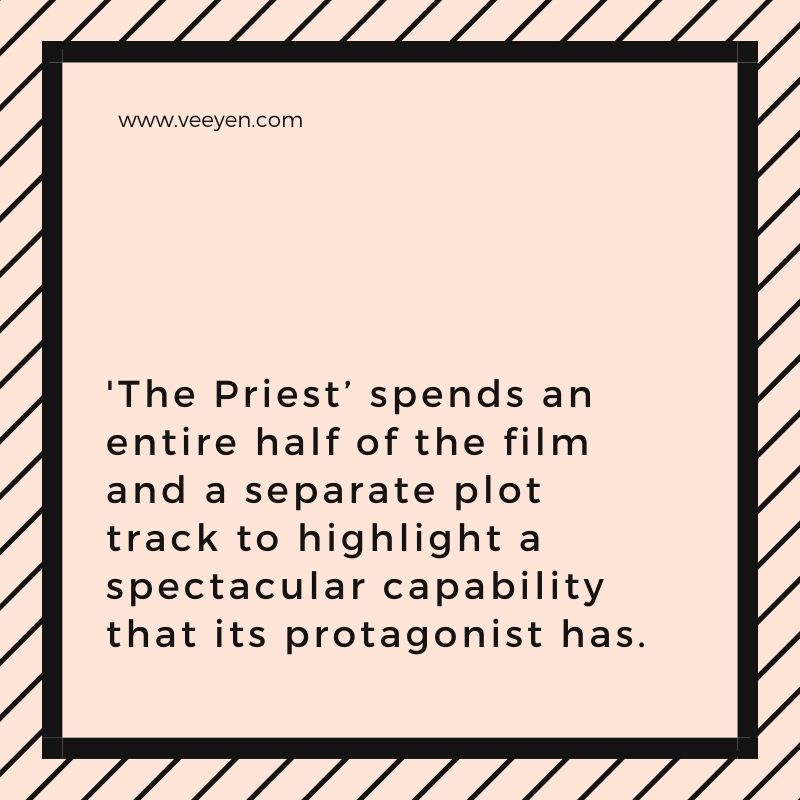 All right. So where does this all lead to? Pretty much nowhere is the answer. ‘The Priest’ spends an entire half of the film and a separate plot track to highlight a spectacular capability that its protagonist has. This arrives in the form of a twist at the half way point, but if you have paid attention to how dead Saniya Iyappan’s expressions had been, there’s not much of a surprise in store there. (Wink, wink!)

Post-interval, the priest shifts focus to the kid, and by then she has established a rare, strange rapport with her new Math teacher, Jessy (Nikhila Vimal). Not in her weirdest dreams would Jessy have imagined that this summer vacation with Ameya would bring in much more than she had ever bargained for. Its an entire horror package that awaits her, rendered complete with her long abandoned, dusty ancestral home and plenty of jump scares, snarls and screeches to go with it.

There are coincidences galore in ‘The Priest’ that do not encourage questions. See for instance the manner in which Elizabeth Alatt runs into Ameya, or even worse, how Jessy gets posted at the very school where the troubled girl is. But then as the Priest himself says, you could choose to believe it or perhaps not. There’s some more talk on scientific theory and a dark zone, but I suspect I might have missed some of it. 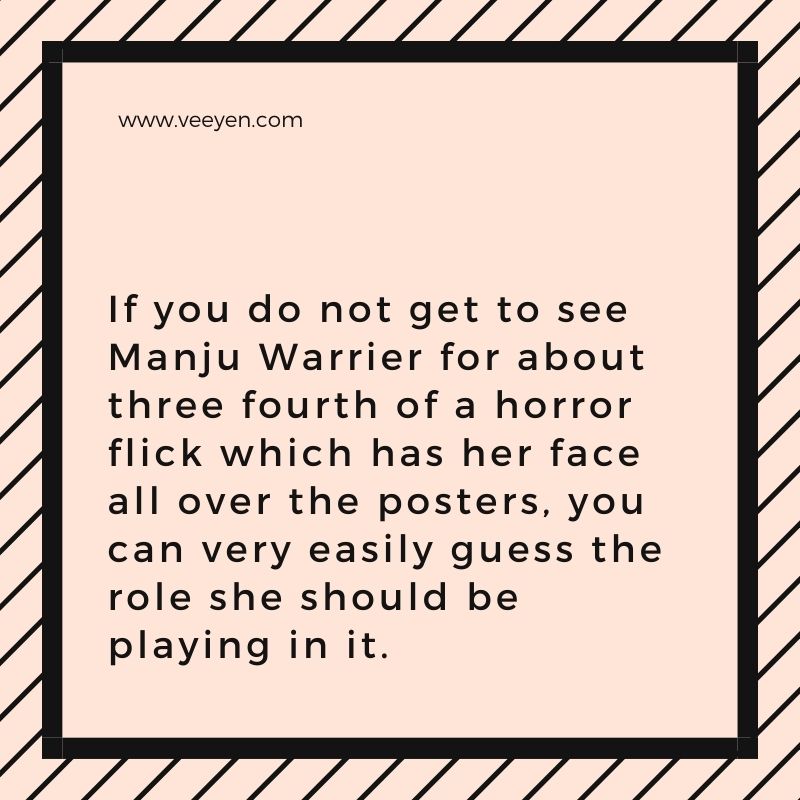 If you do not get to see Manju Warrier for about three fourth of a horror flick which has her face all over the posters, you can very easily guess the role she should be playing in it. And you are not wrong. Come to think of it, it’s a bit embarrassing to watch her in the role that she essays in ‘The Priest’, but I guess every actor needs a break after a while and playing Susan in ‘The Priest’ must have been one such welcome respite for her.

Try hard as you may, it could be strenuous for you to be awestruck by the shivery shudders that the film tries to send down your spine. There is the mandatory exorcism scene with the priest, a doctor (T G Ravi who looks like he has lost his marbles, and rightly so) and the teacher around a table onto which the girl has been strapped to. The screaming, the thudding and all the anticipated commotion follow, but the spirit refuses to leave its abode. And there is a reason why.

The unveiling of the mystery leaves a lot to be desired, and probably for the first time in horror history, we get to watch an emotionally swayed spirit that sees sense as the priest elucidates on what had actually transpired, while it..err..lay dying a few years back. The vengeful soul is left aghast at the revelation, and it seems obvious that it had never anticipated this plot twist that was lurking around the corner. Cannot really blame the poor thing since it turns out that it has been roaming the earth all these years under a severe misconception and I’m sure you would agree that this isn’t some ordinary tragedy that frequently befalls a ghost. 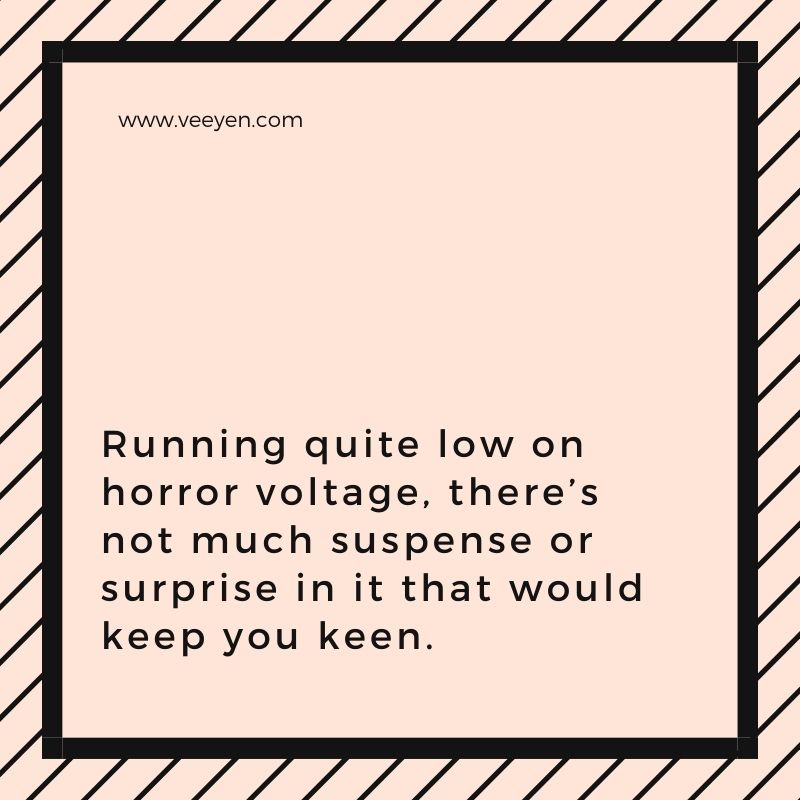 There is nothing spectacular when it comes to performances, and even veteran actors as Mammootty and Manju Warrier sleepwalk through the roles that they have been offered. The child artiste Monica does a good job and Nikhila Vimal looks every bit the pretty girl that she’s supposed to be. There is a decent feat from Venkitesh, the young actor who plays Siddharth, Jessy’s fiancé in the film.

The thrills that ‘The Priest’ offers are of a low intensity, which is why ‘The Priest’ comes across as a non-event. Running quite low on horror voltage, there’s not much suspense or surprise in it that would keep you keen. Which is why, I would give ‘The Priest’ a pass, and wait for Jofin’s next that should hopefully be a more measured work than his debut film.