Ajai Vasudev’s ‘Masterpiece’ has snippets from writer Udayakrishna’s former films, that the latter stitches together with  a banal thriller thread and a few drained out jokes, making it appear a botched up film. And yet if you are the kind who might get goose bumps galore, watching Eddie hurl away a dozen goons all over the campus playground, you are more than welcome to grab that ticket right now. 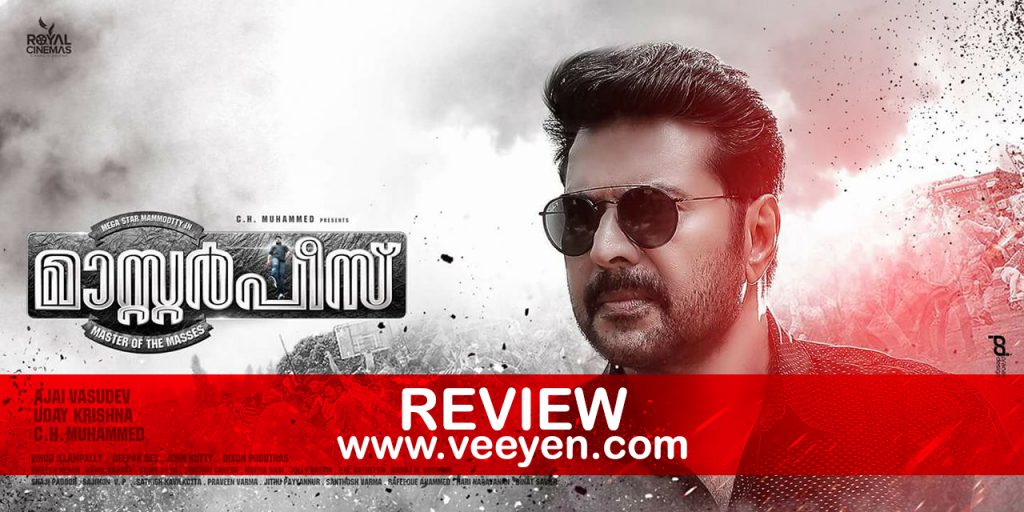 Edward Livingstone (Mammootty) is no ordinary associate professor in English language and literature; he has been repeatedly transferred from one college to another, following complaints of gross misconduct, and has also had a few criminal cases to his credit, one of which involves stabbing a colleague. And the swagger is something that shouts out from the rooftops that Edward is no commonplace teacher; you even start suspecting if he is a mere man.

The moment he walks into the staff room, his colleague Smitha (Poonam Bajwa), of navel flash fame goes all wobbly in the knees, and throws a coy glance his way, which Edward very readily acknowledges. At some point in the future, he would also explain to her that the heart comprises of four compartments and that he has left three of them free, much to Smitha’s relief, since she had terribly been distraught at the sight of Edward chatting up with an attractive woman.

There are characters aplenty that you wouldn’t forget in a hurry, mostly on account of the inanity that they spew around. Start off with John Thekkan IPS (Unni Mukundan), the investigating officer whose red Pajero  hasn’t heard of speed rules, Maniyan (Pashanam Shaji) who churns out truck loads of grossness and his sidekick (Bijukkuttan) who squeaks and squeals in all earnestness. The peon Sanakarankutty ( Santhosh Pandit) spikes up his hair and struts around in olive green trousers, pledging his love to Smitha, the one (and only) woman who makes life on this campus tick.

This is no ordinary campus either – certainly not the kind where you and I studied – and it doesn’t help that the two student gangs – one led by Roshan (John Kaippallil) and the other by Gokul (Maqbool Salman) are at loggerheads with each other. The Principal (Sunil Sukhada) and the Vice principal (Mukesh) have little else to do other than intervene and bring about a truce, each time the gangs decide to take it rough, complete with hockey sticks and what not. 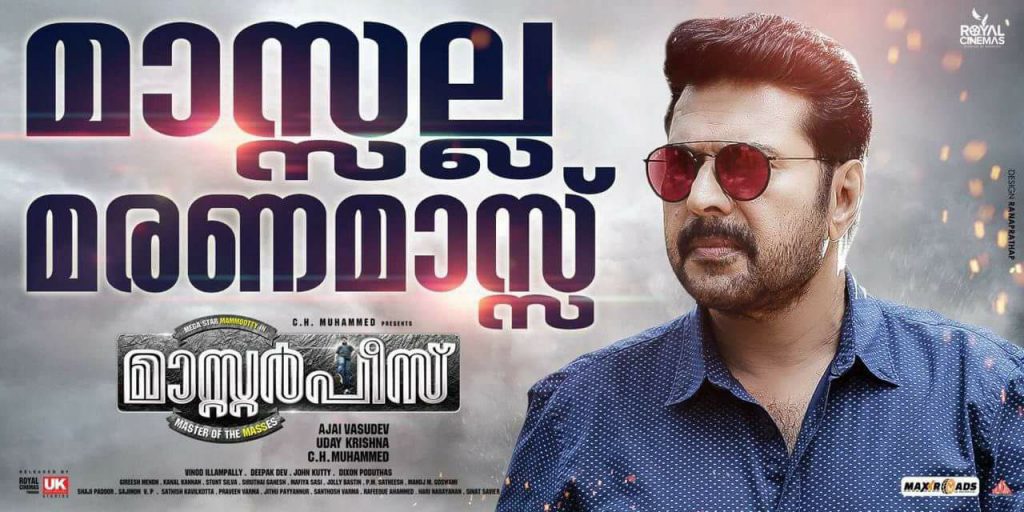 It has long come to a point, when seeking for logic in a script penned by Udayakrishna would be nothing but foolhardiness. But with each film, he seems to be stretching his limits even further, and in ‘Masterpiece’ he throws in a murder, for that extra fizz. There is a PTA meeting scene in the film where the police, the education minister, the college authorities, staff, students and all other possible beings on the earth sit in an auditorium and discuss the investigation and the possibilities of an arrest. Not exactly sure if bringing in some amusement was the intention, but it certainly didn’t seem that way.

It doesn’t end there, and it rains follies, one after the other, making one wonder if there could ever be an end to it. Perhaps on a sudden realization that a woman police officer is likely to draw in more wolf whistles than poor Thekkan, the man is packed off after an accident and Bhavani Durga IPS (Varalekshmi Sarathkumar) strides in and takes over the mantle.

A special word has to be mentioned of the action direction in the film that has less to do with action and more to do with aeronautics. Without doubt, Eddie is a man of steel, and one who could simply push his fists forward with a grimace writ large on his face; an action that is no ordinary, as would be realized by his adversaries in no time. They soon get busy flying across the air, like bats out in broad daylight, and crash against SUVs, tearing down their doors or hurtling over football goal posts, smashing them down in the process. Serves them right.

Meanwhile, the students are enthralled that they have finally been gifted with a Goonda Sir and line up on either sides of the pathway to greet him with earth shattering claps. The gang leaders are in for a little bit more excitement as Eddie takes them out once in a while to take part in a car chase or two with the police squad. 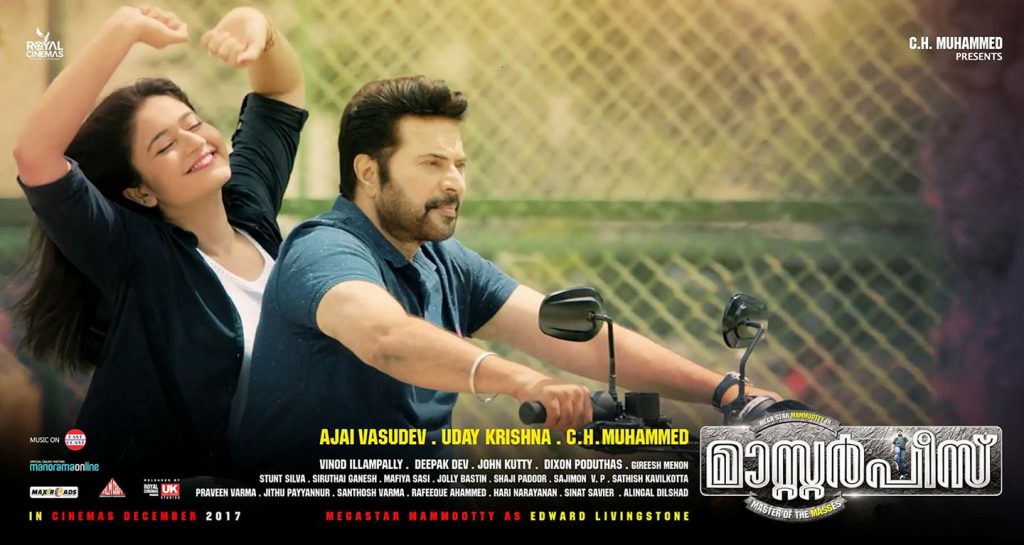 Eddie on a clean-the-campus spree gets the students to break out into gigs on a ‘Wake Up’ song, and Assistant Professor Smitha, who has always been a traditionalist at heart, as if waiting for a cue, grabs a lungi and a blouse and joins the boogie.  She knows there isn’t reason for concern though, since Eddie does, on every viable occasion, make it a point to state loud and clear that he respects women.

Ajai Vasudev’s ‘Masterpiece’ has several snippets from writer Udayakrishna’s former films, that the latter stitches together with  a banal thriller thread and a few drained out jokes, making it appear a botched up film. And yet if you are the kind who might get goose bumps galore, watching Eddie hurl away a dozen goons all over the campus playground, you are more than welcome to grab that ticket right now.